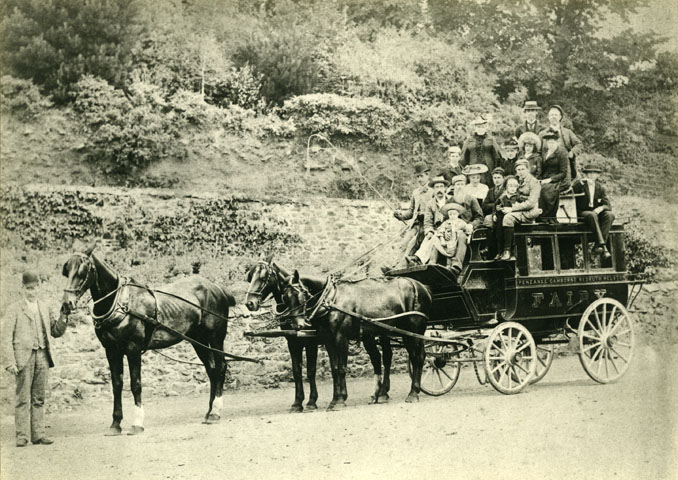 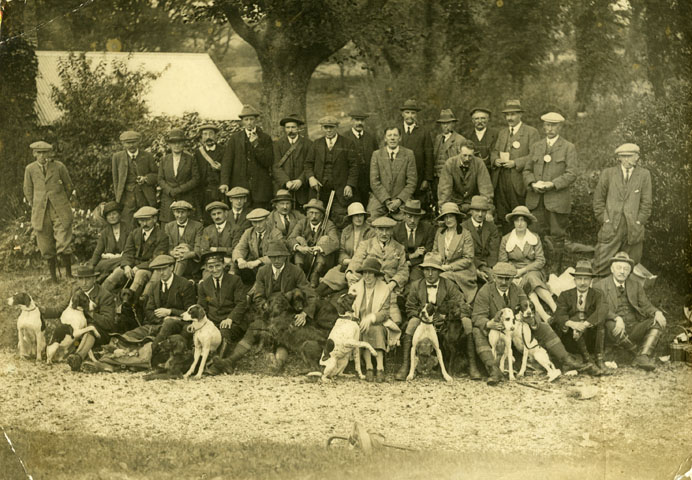 A large group assembled for a day's hunting/shooting. The group consists of 33 men, 6 women and 12 dogs. The whereabouts is unknown, but presumed local. Most of the dogs are hounds rather than retrievers. The photograph is thought to have been taken in the early 1920s 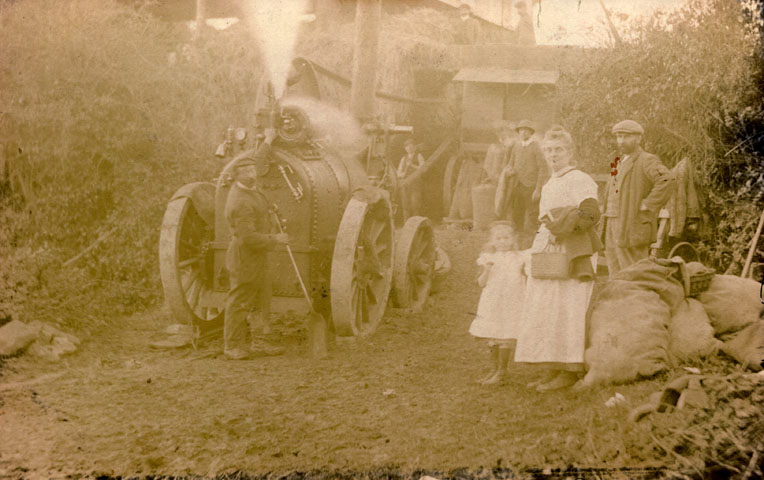 Threshing Machine at Work, about 1910

A photographic postcard showing a farming scene with a threshing machine driven by a traction engine, about 1910. A woman and her daughter are standing next to the filled grain sacks. The location of the farm that the photograph was taken at is unknown. 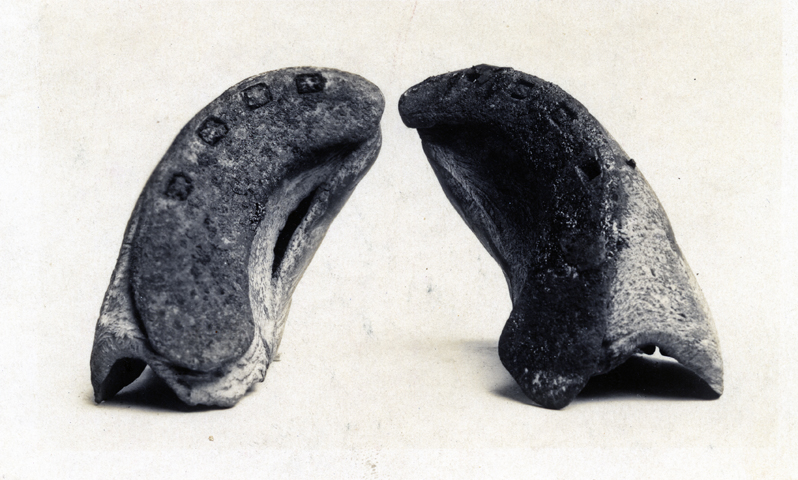 A photographic postcard of ox-shoes, by Gibson & Sons of Penzance & Scilly Isles, about 1900. 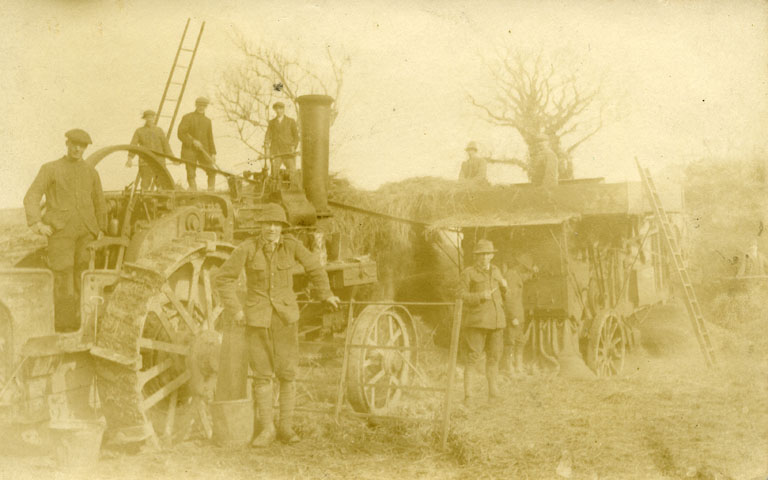 A photographic postcard of a steam threshing machine and eight men, 1920s. The transcription on the back of the postard names the place as 'Hingay', however no information can be found about this location. 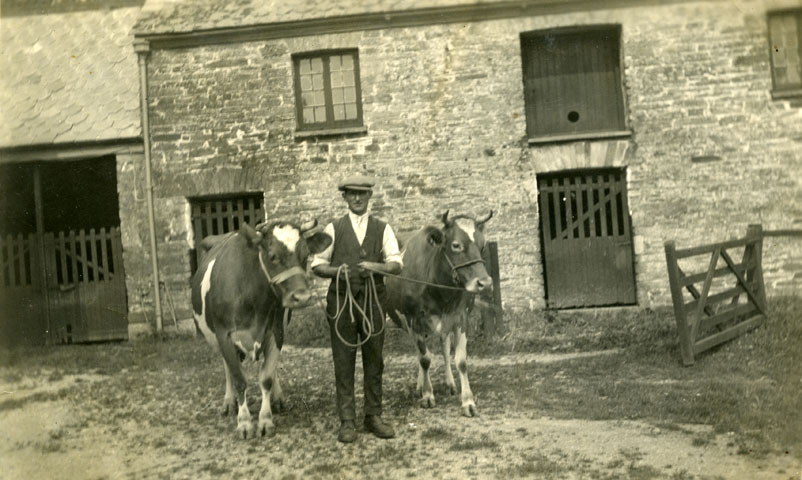 A farmer standing in his farmyard holding two young cows on halters. The farm and farmer are unknown, but believed to be in the local area. The farmer is standing in front of a well maintained stone built barn, and the farmyard is smart and tidy. The farmer is fairly smartly dressed with white shirt, tie, waistcoat and flat cap of 1920s style. 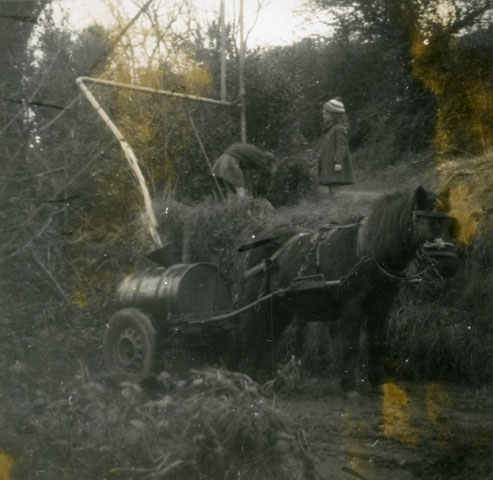 Two young girls operating a water pipe to fill a horse drawn water bowser. The water drum is being carried on a two wheeled waggon with tractor tyres. The location of the photograph is unknown but believed to be in the Helston area. 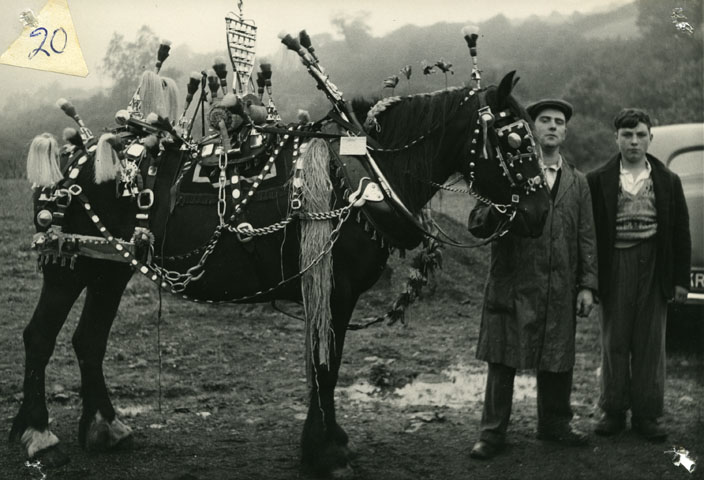 A highly decorated show horse, standing with two men. The horse is bedecked with a profusion of horse brasses, bells and feathers. A 1940s/1950s car can be seen in the background, which helps date the photograph. 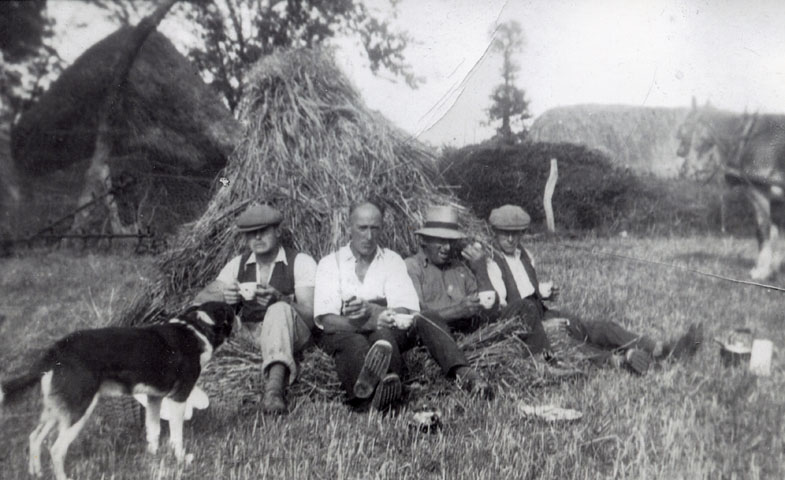 Croust Time whilst Harvesting, about 1920s

Four men enjoying 'croust' whilst harvesting, thought to be in the 1920s. In the background can be seen what appears to be the 'mowhay' with several mows of hay already harvested. A dog is standing by the men and there is a horse team in the background. 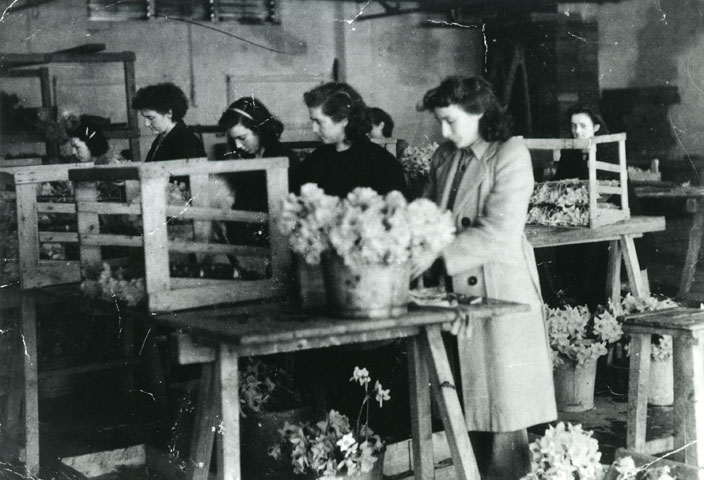 Ladies Bunching and Packing Daffodils, about 1940-1955

A work room with seven ladies bunching and packing daffodils, taken in the 1940s or 1950s. The wherabouts is not known, but thought to be in the local area.

Anderton & Rowlands "Diving Dolphins" carousel, 1930. The ride was first introduced by Anderton & Rowlands in 1921 as the "Golden Dragons". The cars were changed to Dolphins in 1929, just before this photograph was taken. The dolphins were modernised into the Brookland Racer in 1936 in an attempt to try and compete with newer, more popular, rides but it was retired at the end of the 1938 season.

Cabinet card photograph, probably of James Thomas Hocking's brother, Edwin Hocking (14.5.1873-7.8.1961). The photograph was taken by W M Harrison, about 1902, and pictures Edwin, wearing his military uniform from the Boer War, sitting astride a horse. The Hocking family farmed at Pengilly Farm, Breage, and Gwedna Farm, Breage. Edwin and James left for the goldfields of South Africa, possibly on the "Moor" which departed from Plymouth on 4th February 1896. Like many of their countrymen working in South Africa in 1899, the brothers joined the Boer War and enrolled in Natal Volunteer Ambulance Corps in December 1899. Edwin was a stretcher bearer and took part in the Relief of Ladysmith in 1900. He later returned home and settled to farming and breeding champion horses at Modder House, Godolphin. This photograph is part of a collection relating to James Thomas Hocking, 1870-1936, including items from his service in the Boer War.