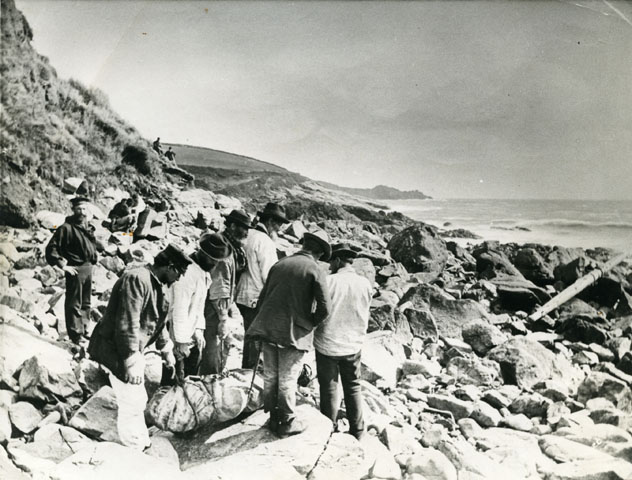 Men carrying a victim of the wreck of the 'G I Jones', near Praa Sands. Six men are carrying the body wrapped in canvas. Another sailor is looking on and there are further sailors sitting on the rocks in the background. A large wooden mast can be seen on the right hand side of the photograph. The G I Jones was wrecked near Cudden Point in a furious SSW gale on September 1st 1883 with the loss of Captain Norton and eleven crew. She was bound from Charlestown to Falmouth for orders, with phosphate. Her sister ship, the R H Jones, which was wrecked on October 30th 1877, at the height of the worst SW gale for a decade. The Newport barque stoved past Rame Head and crashed into Plymouth breakwater leaving one survivor out of a crew of 20 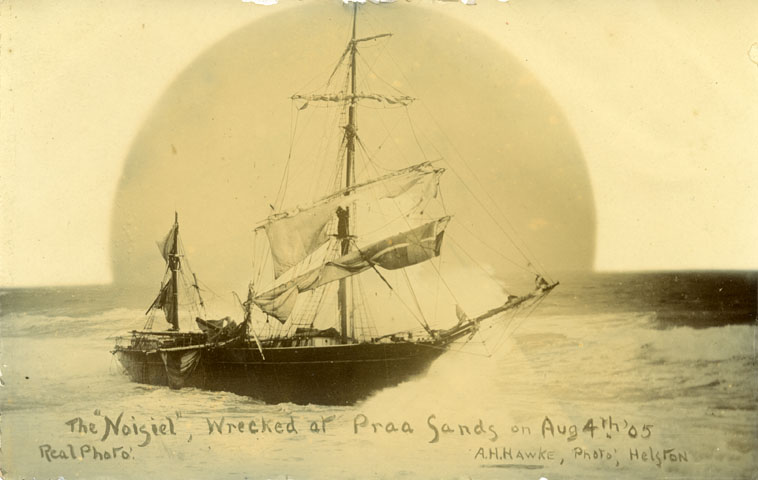 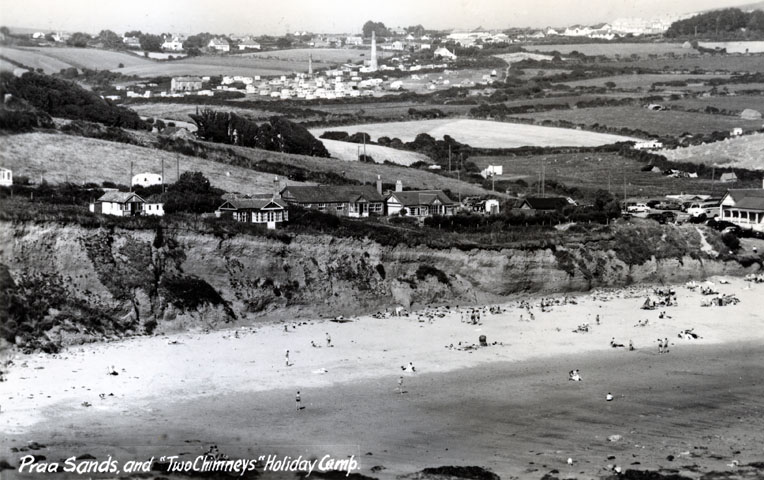 Photographic postcard of Praa Sands and Two Chimneys Holiday Camp, taken around 1948. The photograph is taken from the cliff looking back towards the beach and holiday camp. There are no boulders at the bottom of the cliff, which are now in place as a sea defence. Two mine chimneys can be seen in the centre top of the photograph in the middle of the caravan park. 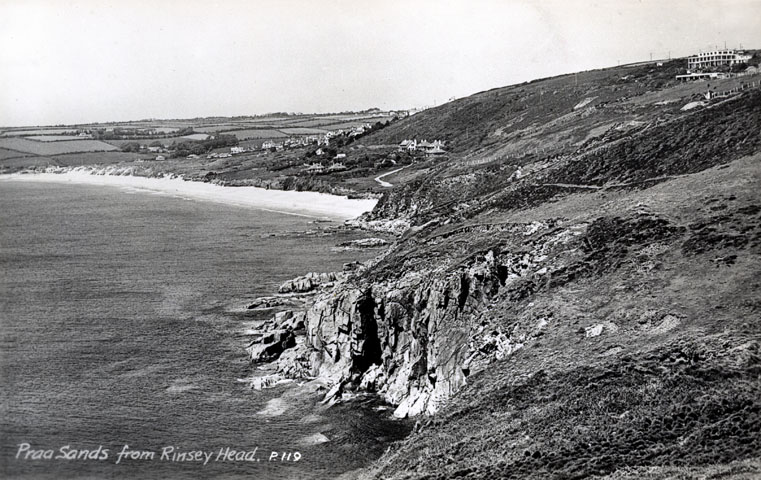 Praa Sands from Rinsey Head, about 1948

Photographic postcard of Praa Sands from Rinsey Head. Taken around 1948, Lesceave Hotel can be seen on the top right hand side of the photograph. Fence posts can be seen along the cliff path. There are cars parked on the green at the bottom of Hendra Lane, and the World War II "pill box" can just be made out on the cliff edge, this is now on the beach. In this photograph few bungalows can be seen along the top of the cliff going towards Praa Green, there are now bungalows all along that stretch of cliff. 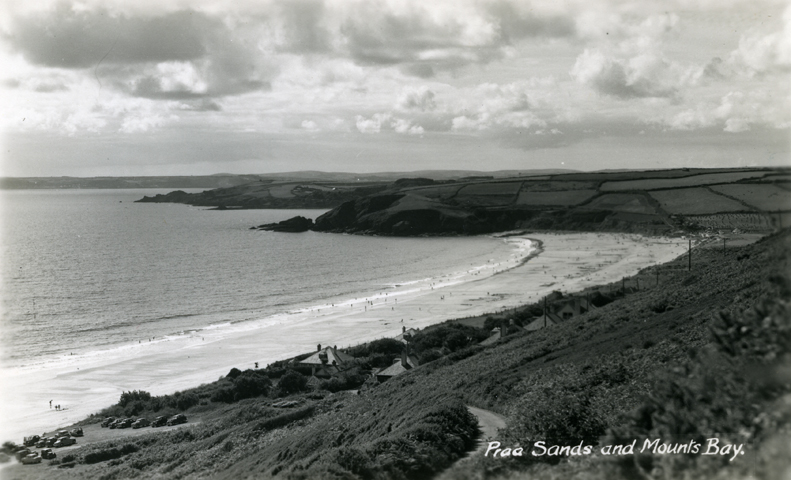 Praa Sands and Mounts Bay, about 1948 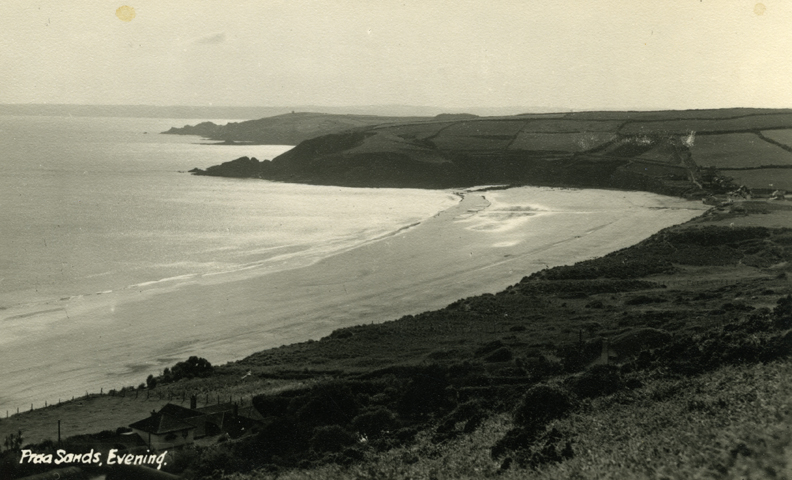 Praa Sands and Mounts Bay in the Evening, about 1948 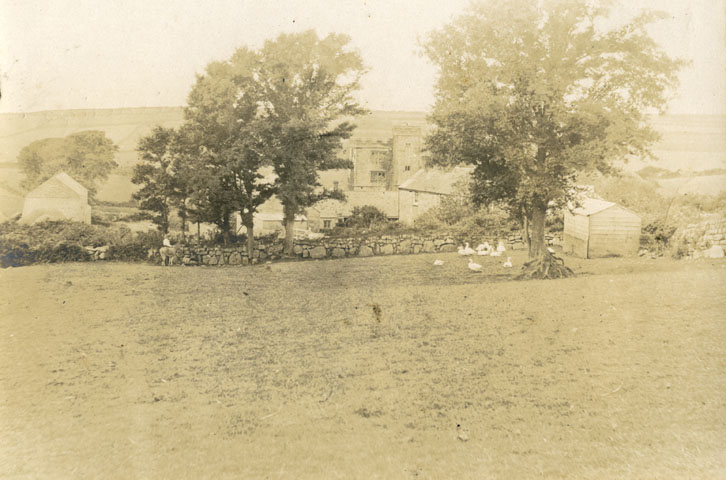 A view showing some of the farm buildings of Pengersick, and the castle, which can be glimpsed in the backgound. A lady and donkey can just be seen standing by the far hedge. Taken around 1930.