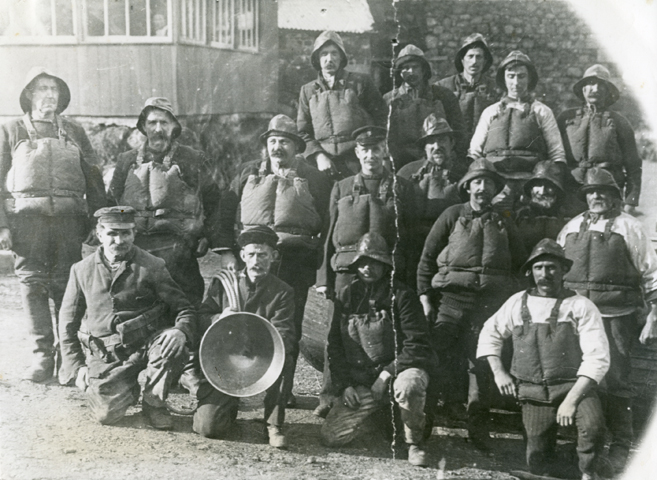 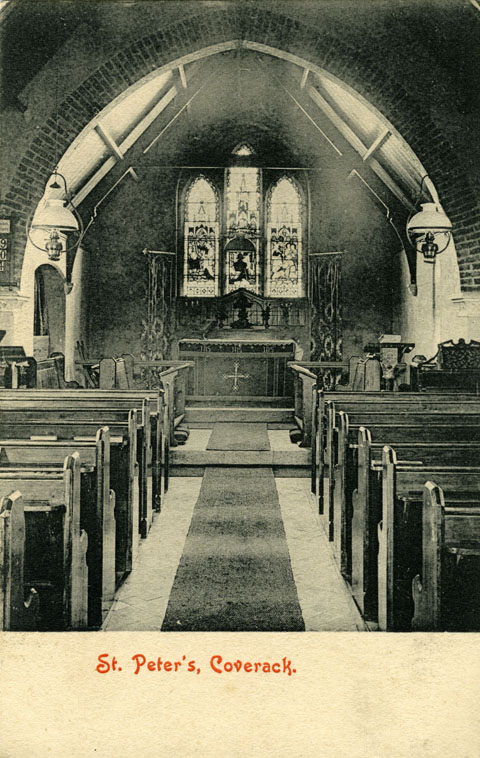 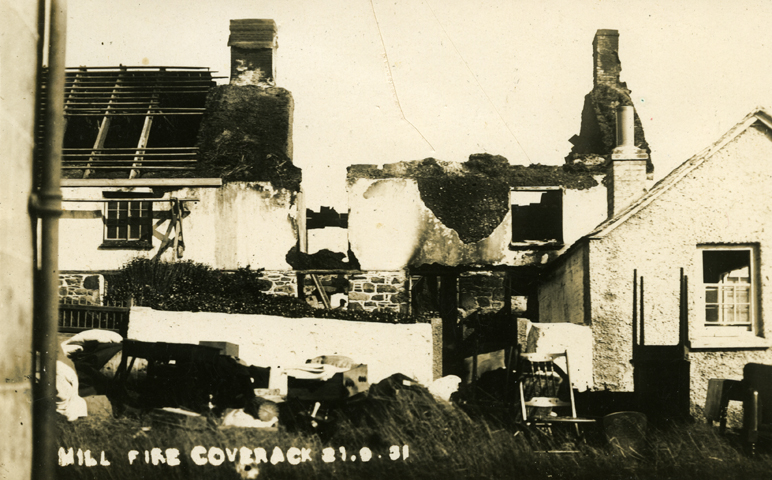 A photographic postcard showing the remains of a mill fire at Coverack on 27th September 1931. 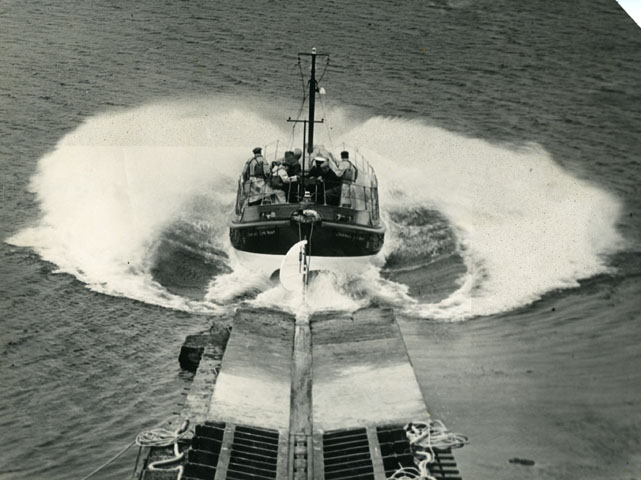 Coverack Lifeboat being Launched, about 1960 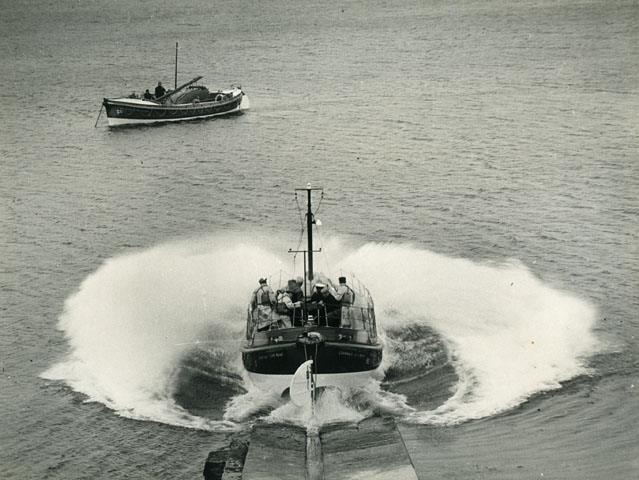 Coverack Lifeboat being launched, about 1960 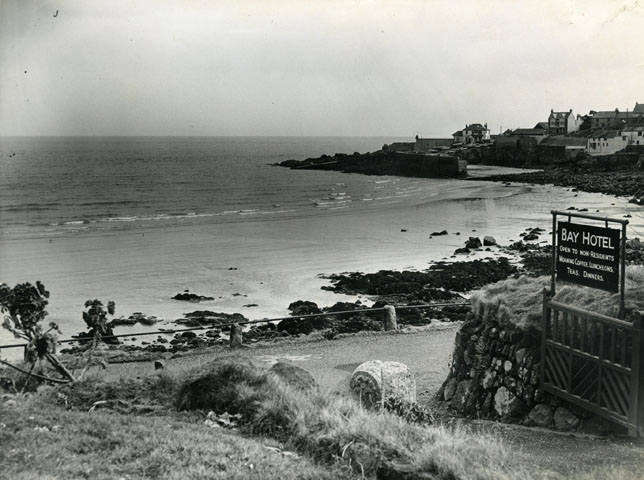 Coverack beach about 1960. The harbour and village are in the distance and signage for the Bay Hotel can be seen in the foreground. Photograph by Wallace A S Fuggle of Helston. 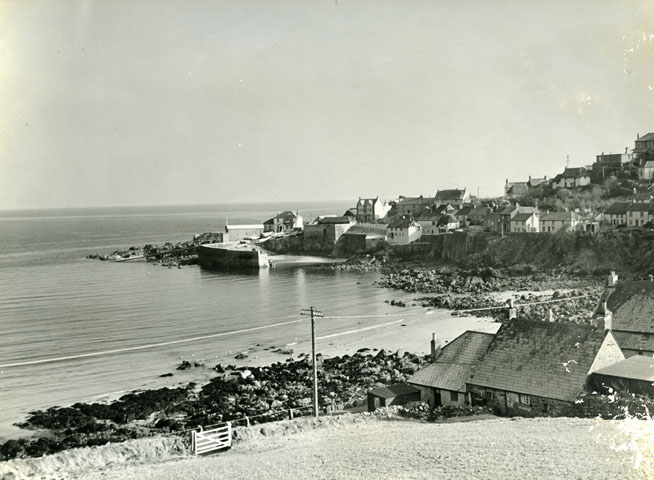 Coverack Beach at Low Tide, about 1960

Coverack beach and harbour at low tide, about 1960. Photograph by Wallace A S Fuggle of Helston. 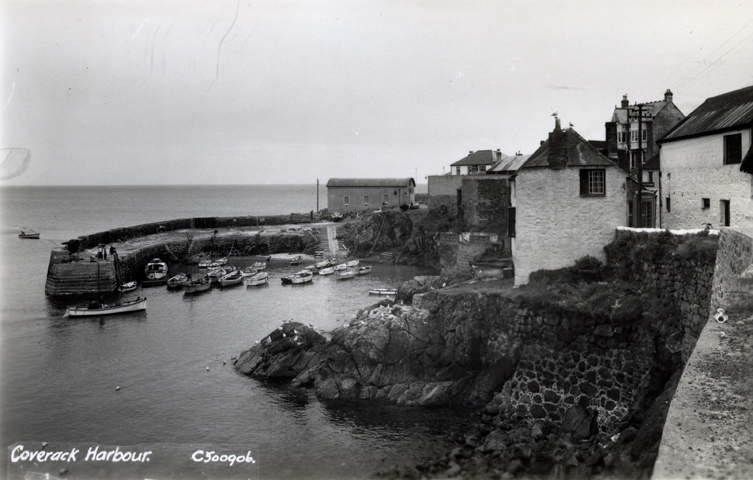 Photographic postcard of Coverack Harbour, looking south. Taken around 1948. There are 3 people standing on the end of the harbour wall, a boat is entering the harbour and one is just off the harbour. There are also a couple of fishermen near the boats at the top of the slipway. 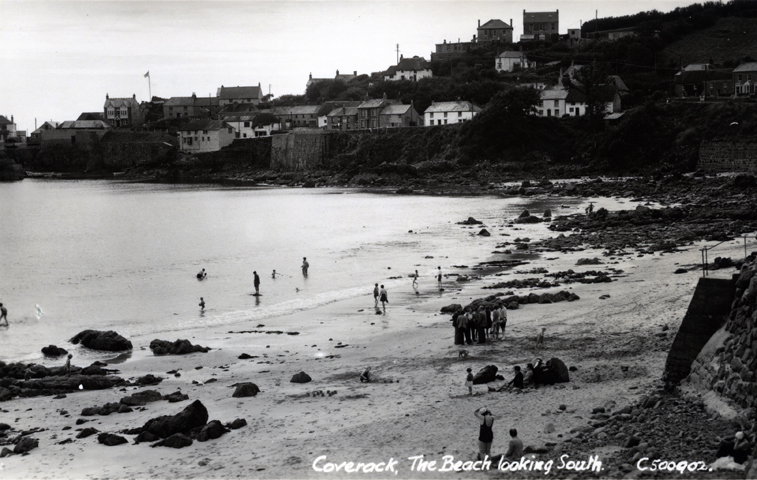 Photographic postcard of Coverack Beach looking south. Taken around 1948. There are a number of people in the sea and standing at the water's edge. A group of people are standing on the sand towards the centre of the photograph while others are sitting and watching children playing and making sand castles. 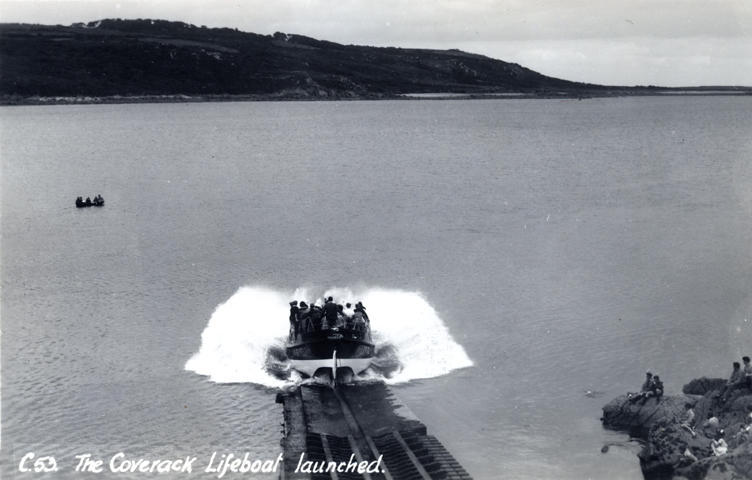 Photographic postcard of the Coverack Lifeboat being launched. Taken around 1948. The photograph is taken from the top of the slip looking towards Lowlands. There are a number of people on the rocks sitting watching the launch and a small boat filled with people in the bay. The Three Sisters served at Coverack between 1934 and 1954. She was a 36 foot Liverpool Class motor lifeboat funded by the Legacy of Miss M Quillar-Couch of Looe. 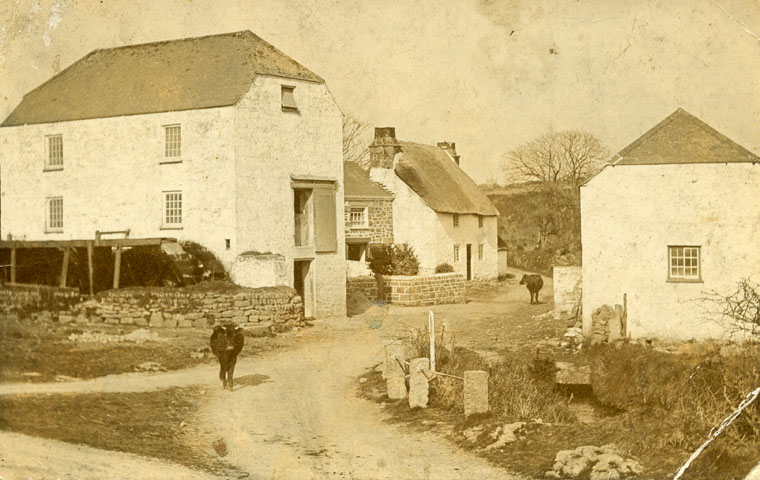 Photographic postcard of Higher Trannack Mill at Coverack Bridges, also known as Boscadjack Mill, about 1900. Two waterwheels which drove the lower mill further down can be seen on the left hand side. The mill is now converted to a house, and the thatched cottage has gone. 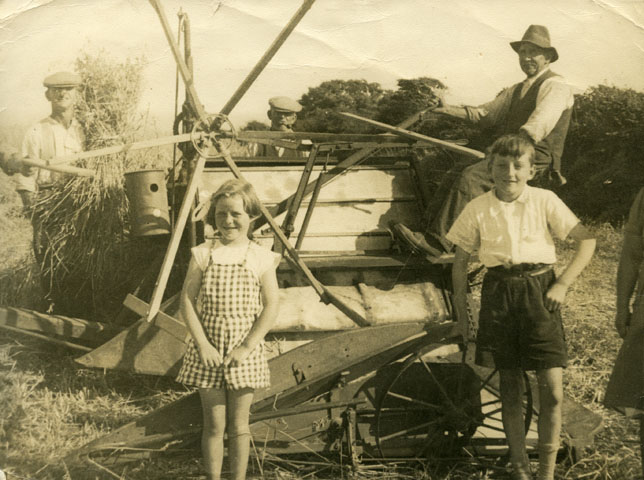 Cutting Corn with a Binder, about 1952

Cutting corn with a binder at Polcoverack Farm, Coverack, St Keverne, about 1952. The little girl is Ann Trewern [later Mrs Hoskin] and the little boy is Ann's cousin John. The gentleman sitting on the binder is Mr Tom Andrew. Ann's uncle, Mr Jim Andrew, is holding the sheaf and her grandfather, Norman Hocking, is the gentleman smoking a pipe in the centre of the picture. 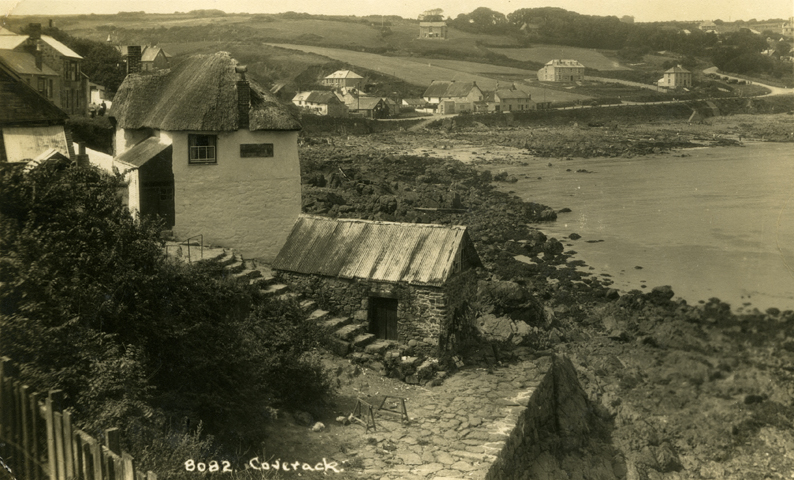 Cottage on the Quay, Coverack, about 1920

A photographic postcard by A H Hawke of a cottage by the quay in Coverack, about 1920, numbered 8082. 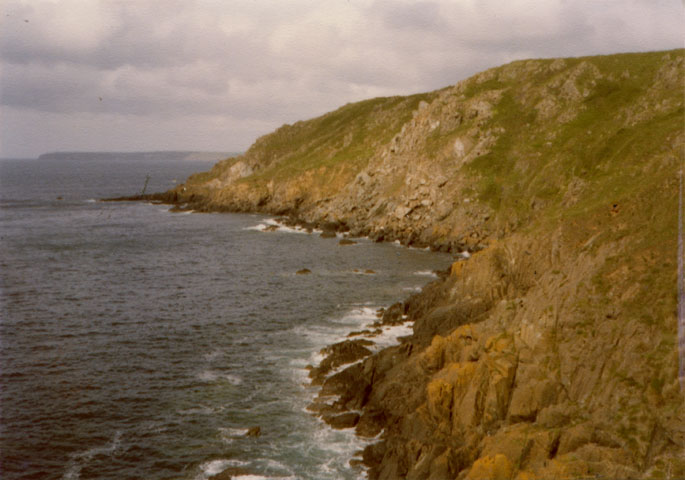 Cliffs forming part of the land of Blackhead Farm, Coverack. This land was sold by auction on 30 July 1978 by Jose Collins and Harris. 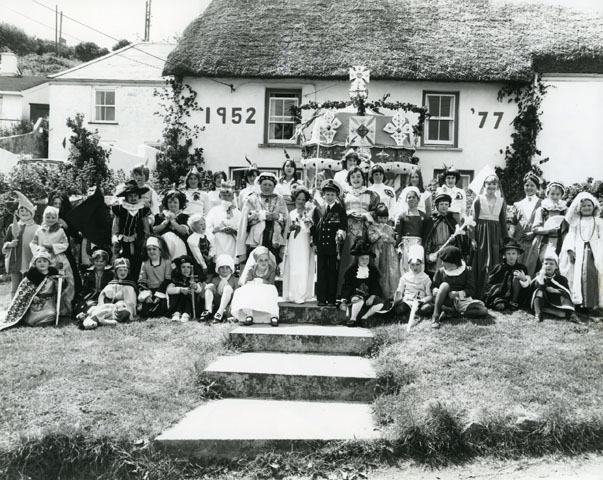 Children in fancy dress costume celebrating Queen Elizabeth's Silver Jubilee in Coverack. The occasion was celebrated with large-scale parties and parades across the country throughout 1977. The celebrations culminated in June with official "Jubilee Days" which were held to coincide with the Queen's Official Birthday. Some of the children are identified as Angela Peters, Susan Moor, Madeline Moor, Nicola Bowden, Janet Curnoe. In addition: Sue Englefield as Ann Boleyn; Andrew Ladbrooke as King Harold; Stu Croft as King William of Orange; Andrew Carey as Prince Philip; Glenn Carey as King John. This press photograph was taken by Denis Jory and published in the Helston Packet in 1977. 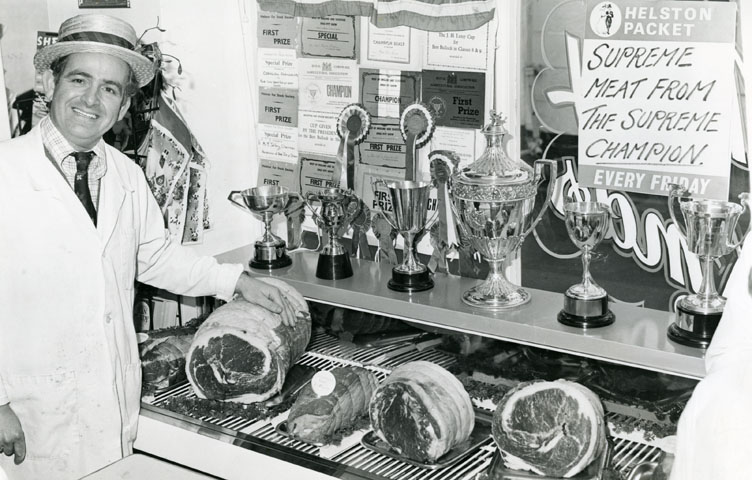 Butcher, Raymond White, in his shop, Cove Stores, in Coverack in December 1977. He is pictured with certificates and 6 trophies won by Rocky, a 14.5 cwt Charollais cross steer formerly owned by Anne Pascoe of Nancegollan. A sign stating "Supreme meat from the supreme champion" can also be seen. This a press photograph taken for, but not published in, the Helston Packet, 23rd December 1977.