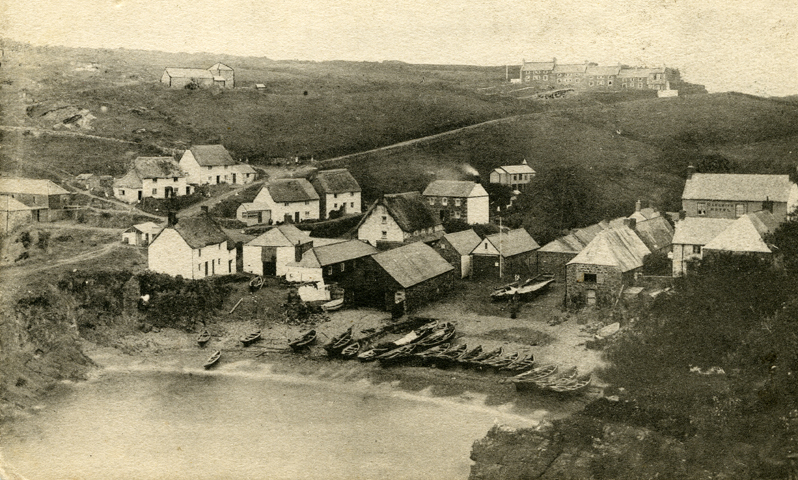 An Argall's Series postcard of Cadgwith showing fishing boats, circa 1904. 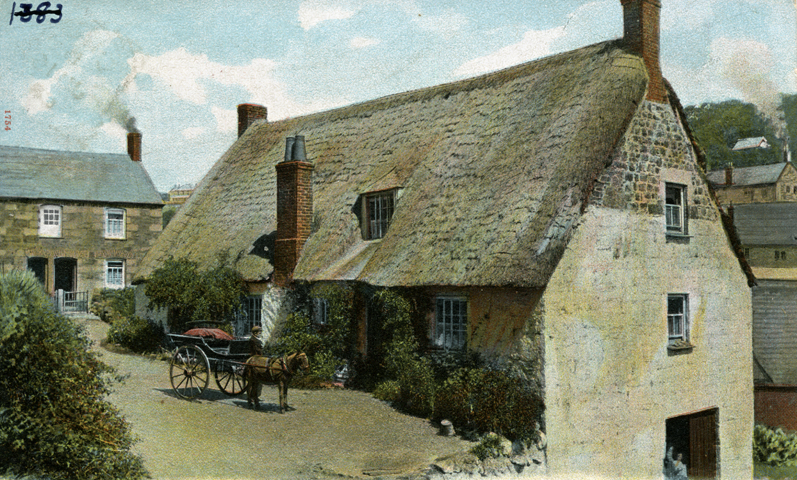 Coloured postcard by Peacocks, postmarked 1908, showing a horse and cart outside an old cottage in Cadgwith, Ruan Minor. 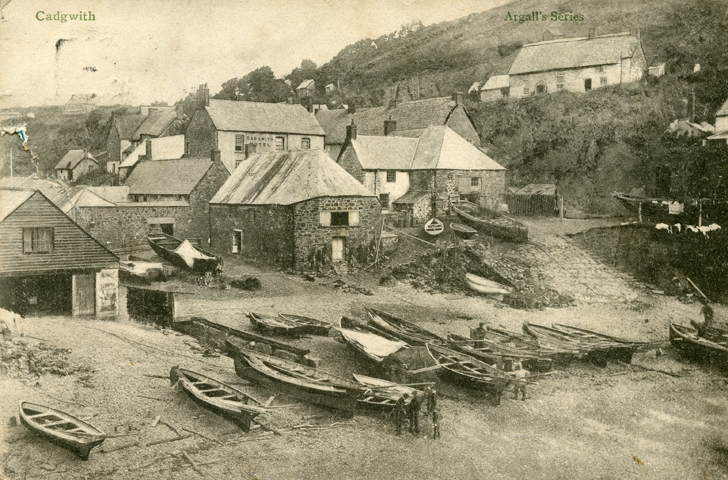 An Argall's Series postcard of Cadgwith, sent in 1904, showing fishing boats pulled up on the shore. 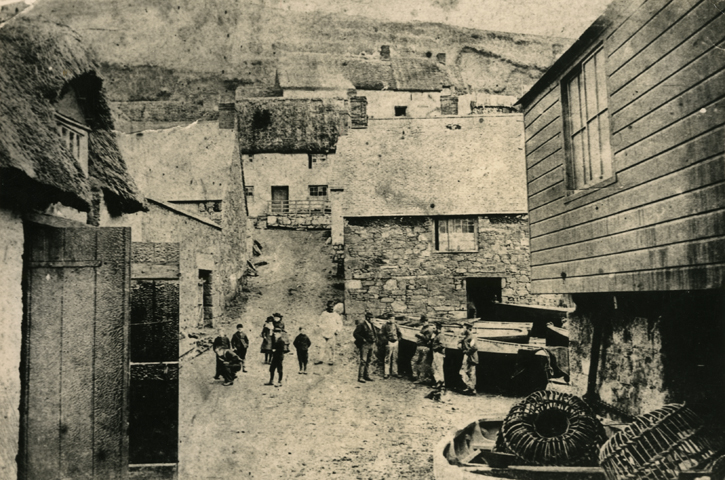 Cadgwith, taken in the early 1900s, showing a group of fishermen and children. 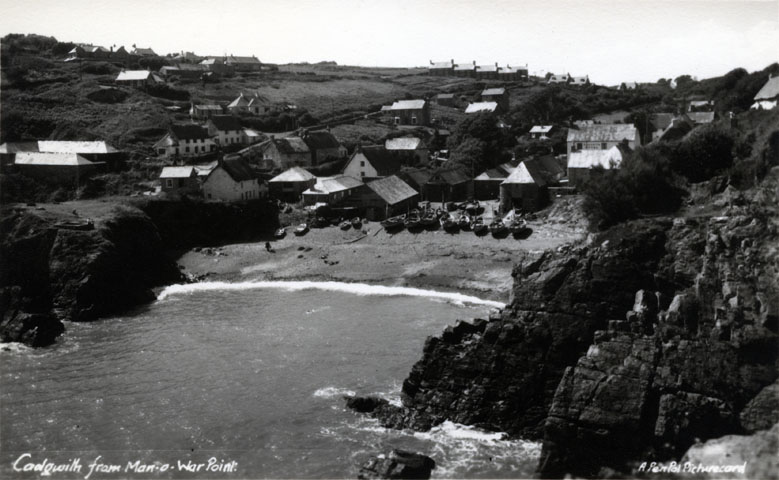 Cadgwith from Man-o-War Point, about 1948

Photographic postcard of Cadgwith from Man-o-War Point. The photograph is taken looking back towards the village and the boats drawn up on the beach. Taken around 1948. 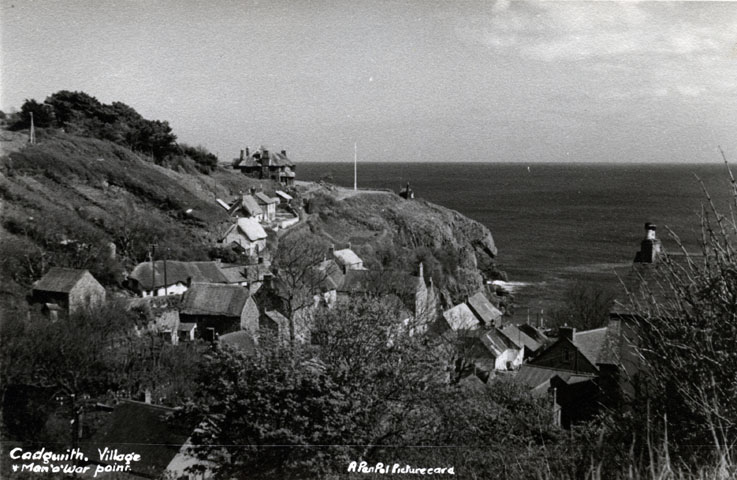 Cadgwith Village and Man-o-War Point, about 1948

Photographic postcard of Cadgwith Village and Man-o-War Point. Taken around 1948, the photograph looks down through trees to the village, Man-o-War Point and out to sea. 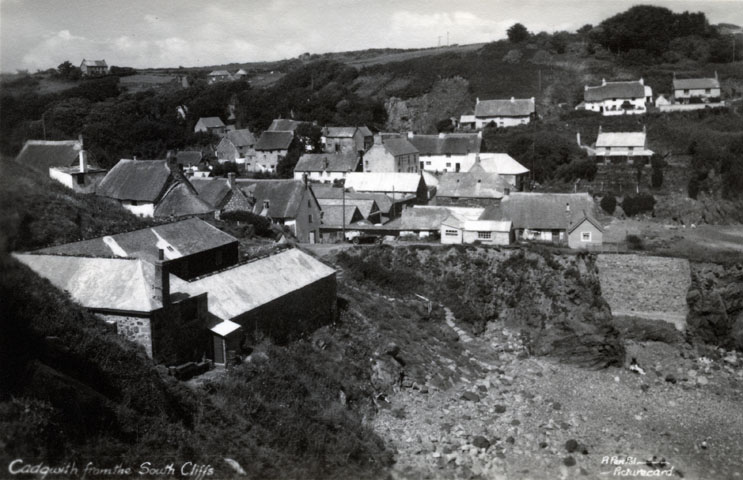 Cadgwith Village from the South Cliffs, about 1948

Photographic postcard of Cadgwith from the South Cliffs. Taken around 1948, the photograph looks towards the bottom of the village and the path that runs up past the cottages to Man-o-War View. 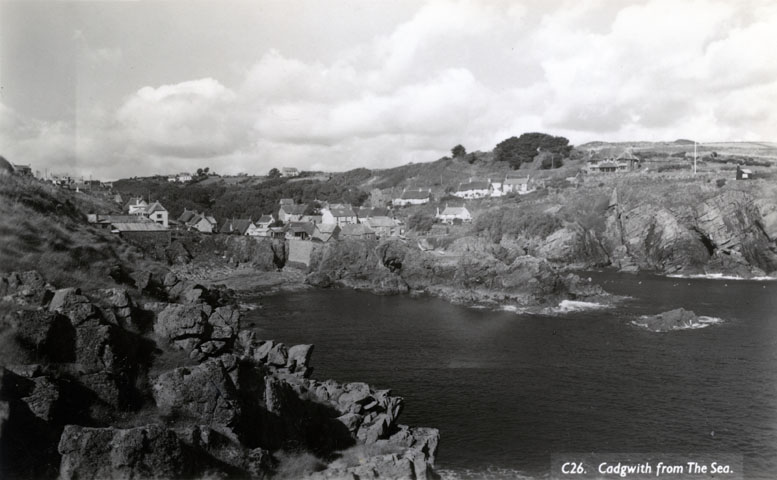 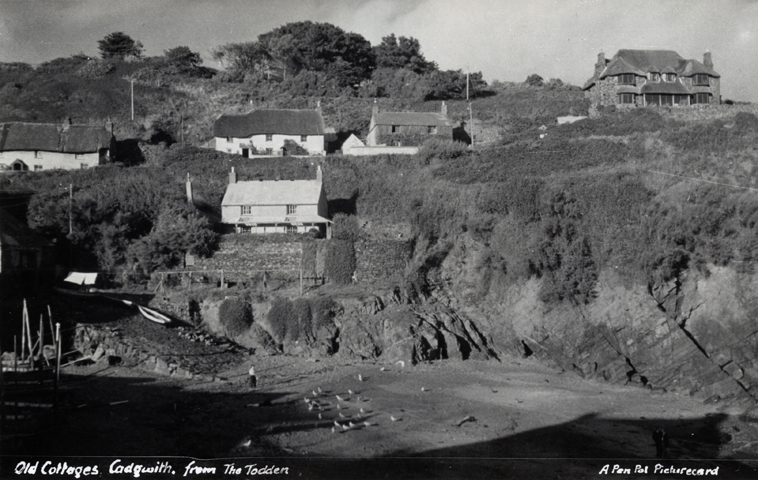 Old Cottages at Cadgwith, about 1950

A Penpol Picturecard of old cottages in Cadgwith taken from the Todden, about 1950. The large thatched house to the top right of the photograph is Bodrigy. Unfortunately this house burnt down in the early 1960s, leaving only the ground floor. The remains of the house were remodelled into a bungalow after the fire. 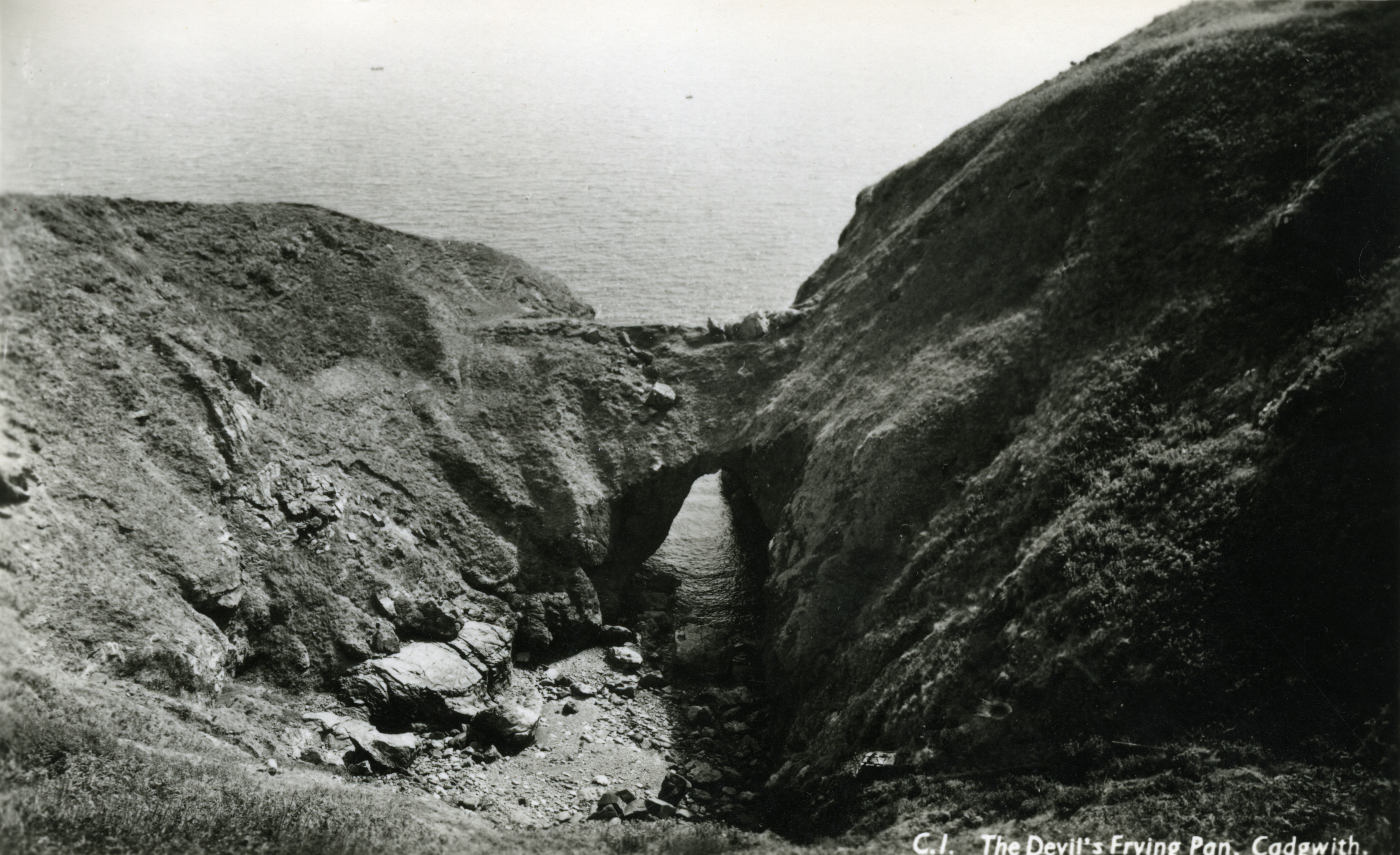 The Devil's Frying Pan, Cadgwith, about 1948

Photographic postcard of The Devil's Frying Pan, Cadgwith. Taken around 1948, the archway was the entrance to a cave which collapsed hundreds of years ago. Formed through coastal erosion, this geological feature is said to have earned it's name because in rough weather the sea crashes so violently around the cave that the central boulder is said to resemble an egg frying in a pan. 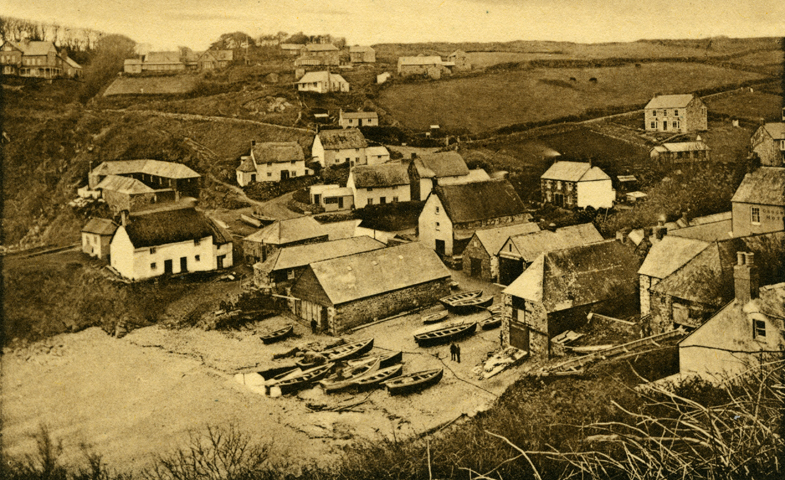 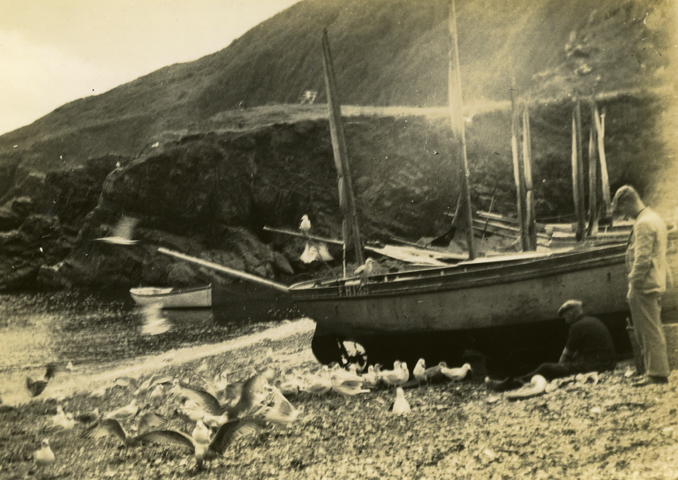 Two fishermen attending a fishing boat on Cadgwith beach with seagulls flocking around them, dated 1928. 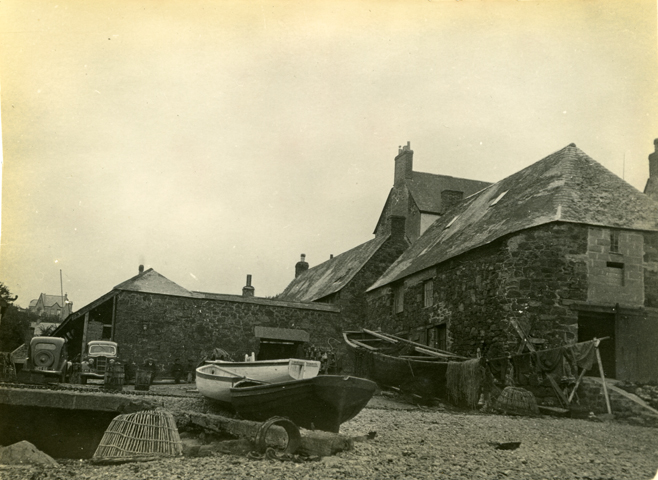 Fishing boats and a crab pot on the beach in Cadgwith, Ruan Minor. Taken by Dyott W Darwell, around 1928. 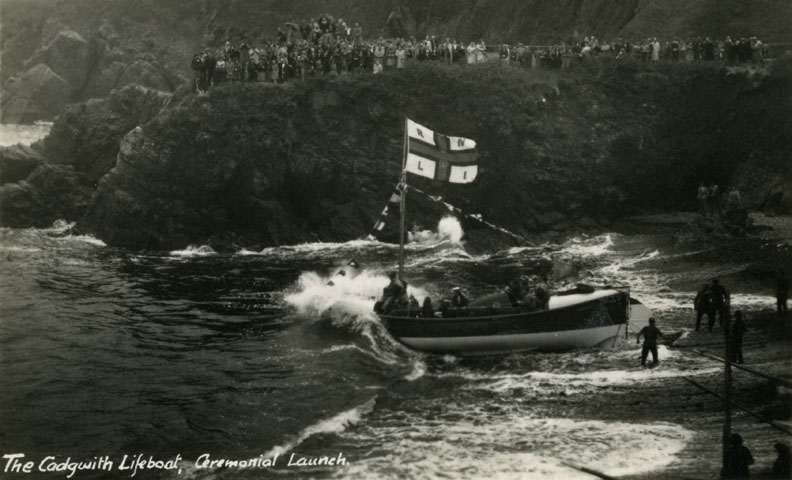 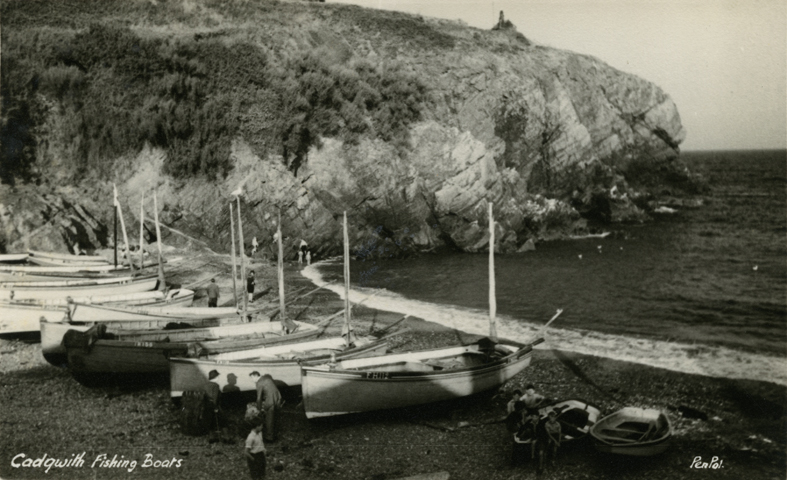 A photographic postcard of fishing boats on Cadgwith beach. The photograph was taken by Frank Grattan for Penpol Picturecards and is dated about 1950 to 1960. 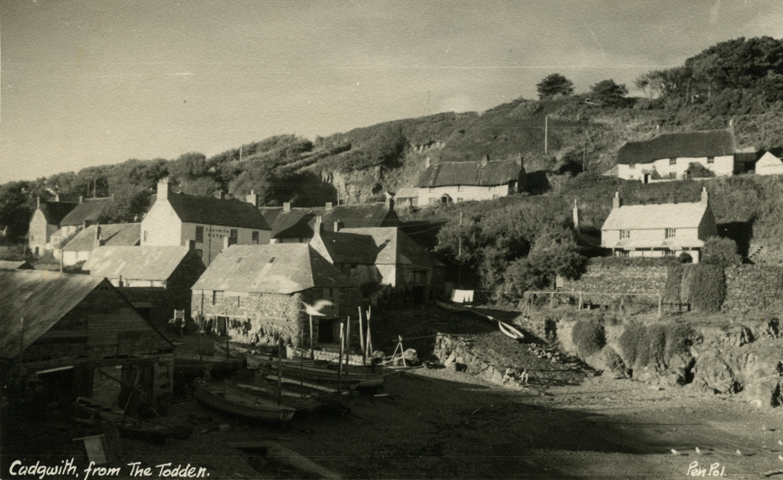 A photographic postcard of fishing boats on Cadgwith beach. The photograph was taken from the Todden by Frank Grattan of Mullion for Penpol Picturecards, about 1950 to 1960. 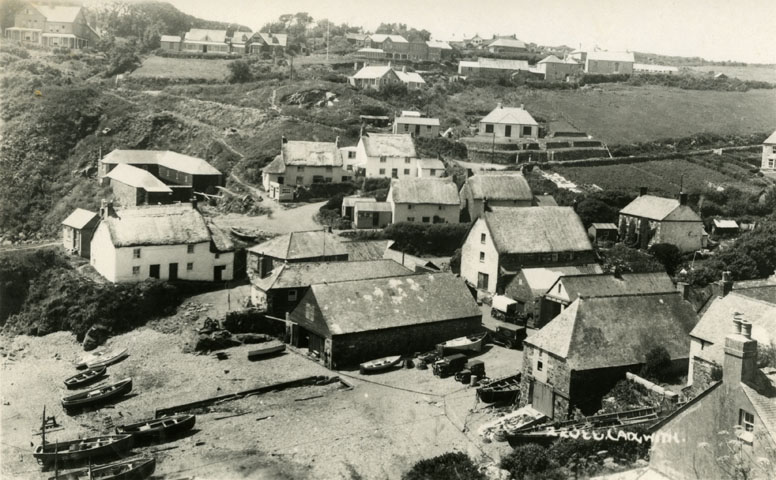 A photographic postcard looking down on Cadgwith Cove, dated 1920s.