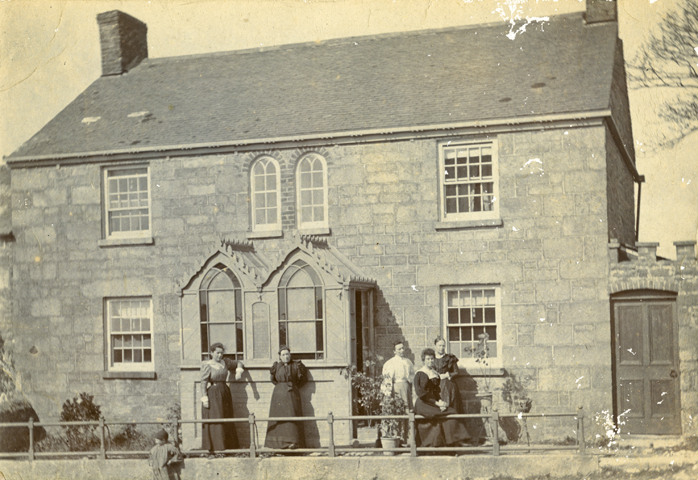 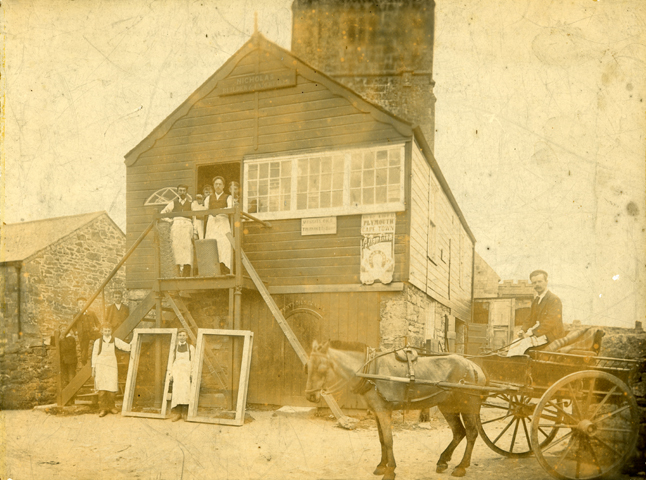 Nicholas carpenter's/builder's/undertaker's shop in Breage, about 1870, by S & J Govier of Breage. The photograh shows the employees standing outside the works holding up windows and other employees standing up the stairs. In the foreground is a man sitting on a horse and cart. 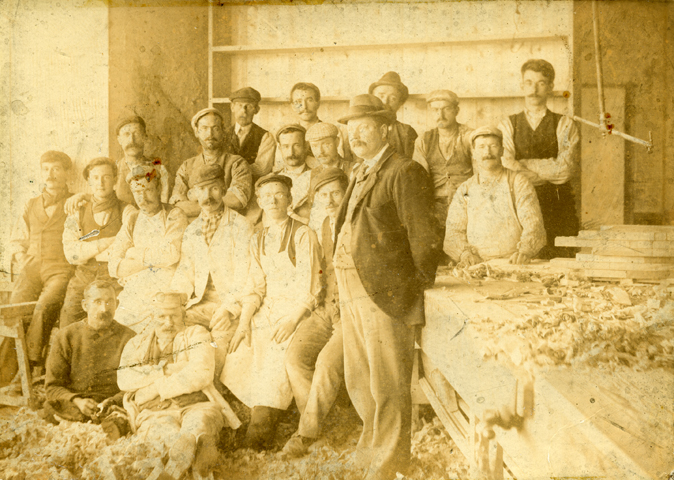 Staff of Nicholas Builder, Carpenter and Undertaker, Breage, about 1870

A group of workmen in the workshop of Nicholas Builder, Carpenter and Undertaker of Breage, about 1870. Included in this photograph is "Coco" Roberts, from Prospect Place. It is likely that Prospect Place refers to Ashton.

The interior of Mr Beckerleg's wheelwright's shop at Breage, showing the lathe and tools, about 1953. The lathe and tools were donated to Helston Museum in 1953 where they remain on display. Photograph by Wallace A S Fuggle of Helston. 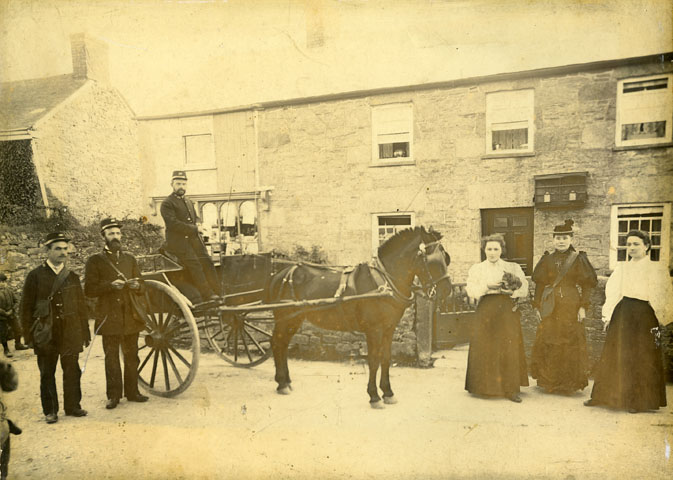 A postman in a pony and trap in front of Breage Post Office, about 1900. Two postmen and three women, one a post lady, are standing beside the trap. Photograph by S & J Govier. 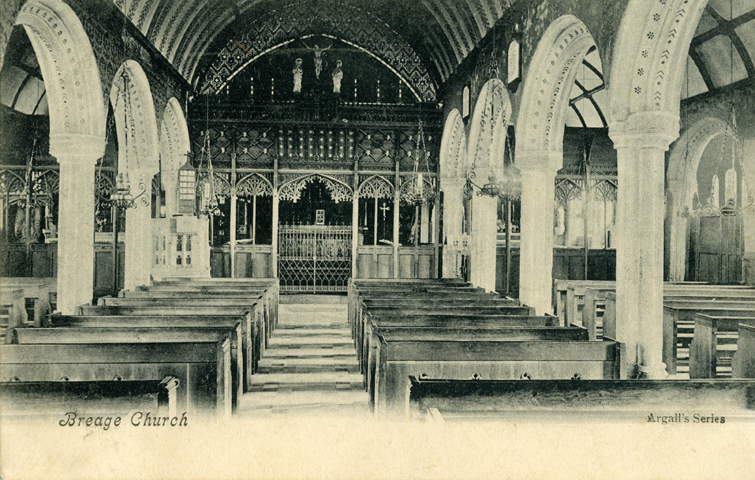 Interior of Breage Church, about 1910

An Argall's Series postcard view of the interior of Breage Church, about 1910. An Argall's Series postcard view of Breage Church, taken around 1900-1910. 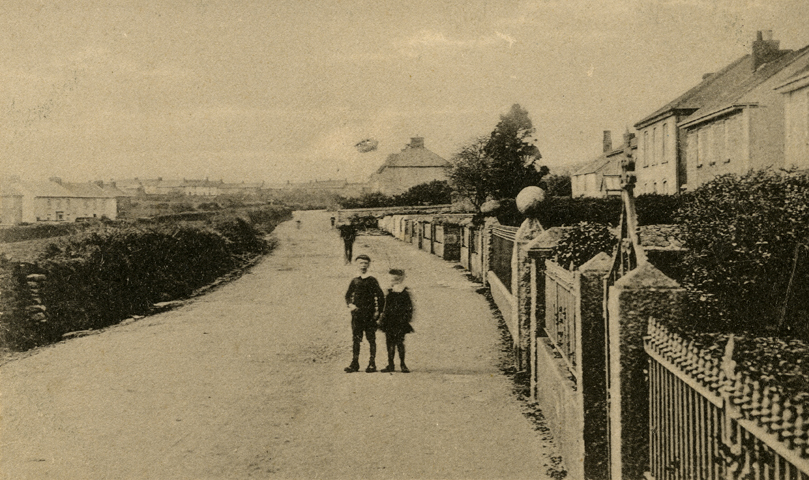 An Argall Series postcard view of Higher Road, Breage, with two young boys in the road, around 1900-1920. A photographic postcard of Ashton village, Breage, dated around 1890 to 1900. 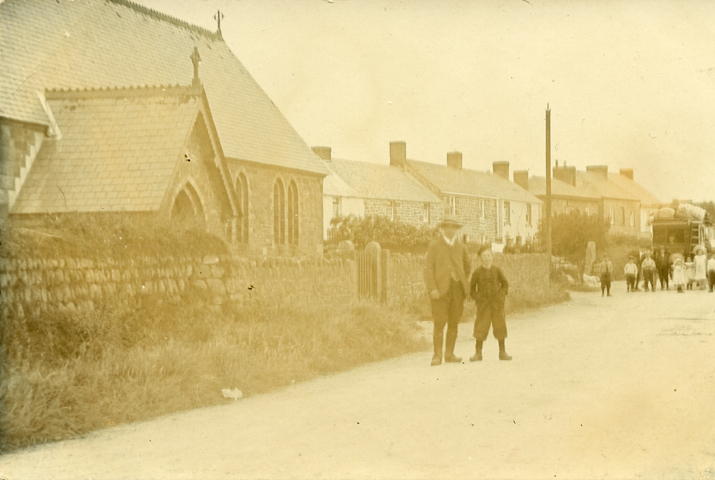 A photographic postcard showing a man and boy standing outside the chapel in Ashton, Breage parish, with young children in the background, dated 1890s. A photographic postcard view of Trew with young man standing on the village green near a horse and trap and geese running across the green. Trelawney House is on the right. The photograph was taken sometime between 1890 and 1920. Village of Breage in Snow, about 1920s

A photographic postcard view of Breage with snow on the ground. 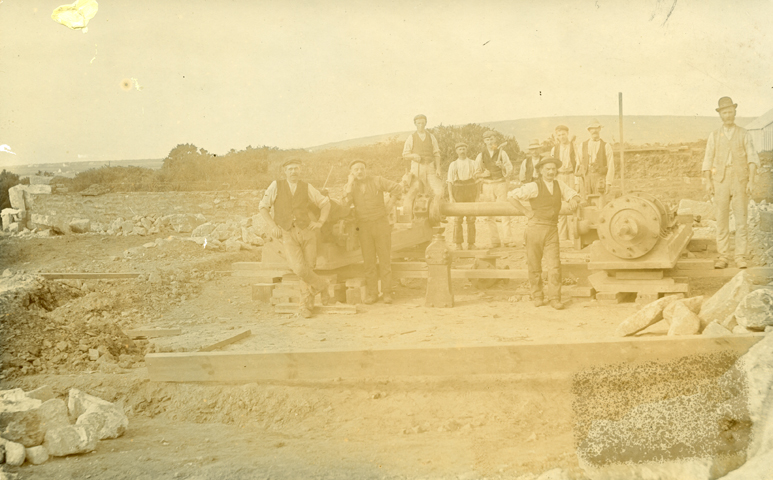 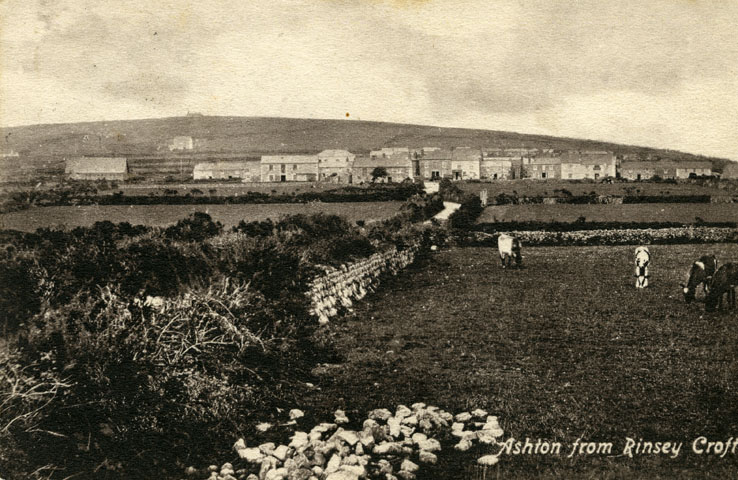 Ashton from Rinsey Croft, Breage, about 1916

A sepia postcard by Ernest C Argall showing the village of Ashton from Rinsey Croft, dated 1916. Cows can be seen grazing in the foreground. The postcard is addressed to Mrs Tonkins of Copeland House, Stubbs Road, Wolverhampton. Carleen Chapel with the Carleen Mine in the background, together with a man with donkey, foal and shay. The photograph is thought to date between 1900 and 1930. 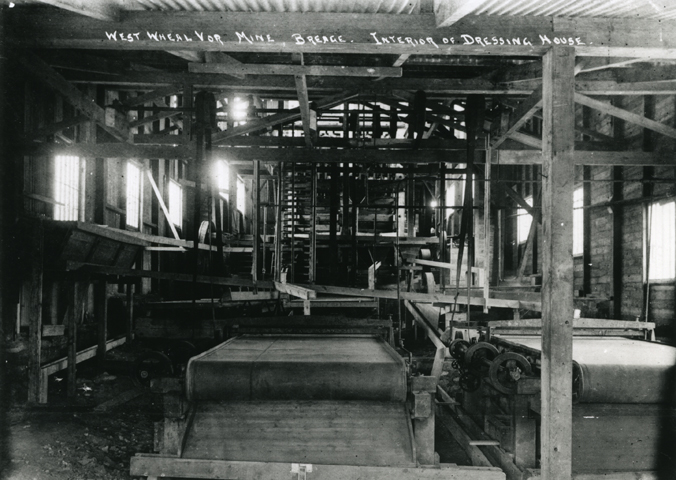 The interior of the Dressing House at West Wheal Vor Mine, Carleen, near Breage, about 1906 when it was re-opening. The photograph shows the height of the building, the stairs leading up to higher levels and some of the tables where ore was separarated for further processing. Photograph by A H Hawke of Helston. 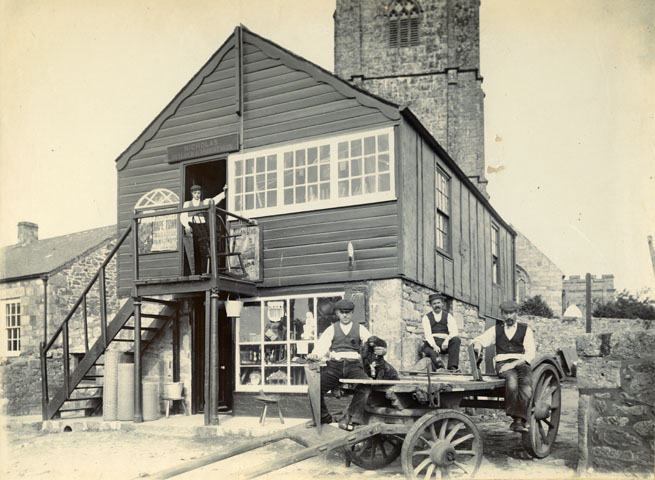 Nicholas carpenter's, builder's and undertaker's shop in Breage, about 1910, by S & J Govier of Breage. One man is standing in the doorway at the top of the steps, three men and a dog are sitting on a wagon. The men are holding their carpentry tools. A Red Cross Presentation at Breage, 1890-1920. A lady is presenting a nurse with an envelope. The presentation is taking place outside. There is a desk between the nurse and the lady making the presentation, and there are chairs behind the lady. There are a number of onlookers, dressed in Edwardian outfits, including anther nurse whose uniform is clearly marked with ared cross. 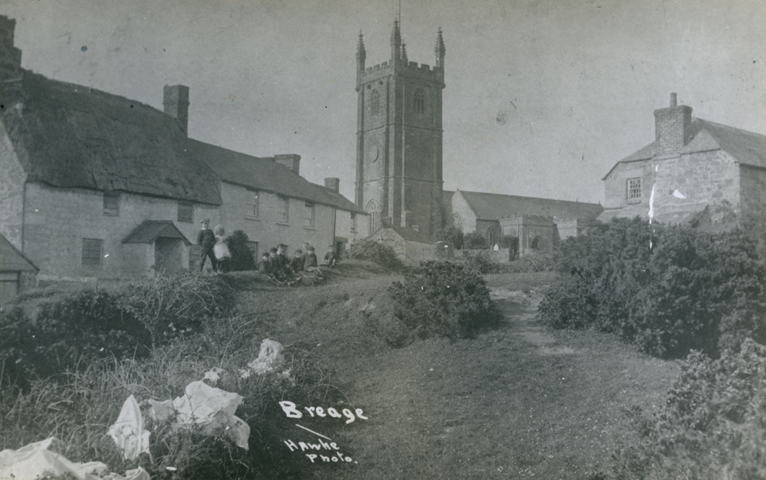 Church and Village, Breage, about 1904

Breage village showing the church and local residents of the village by A H Hawke of Helston, about 1904. 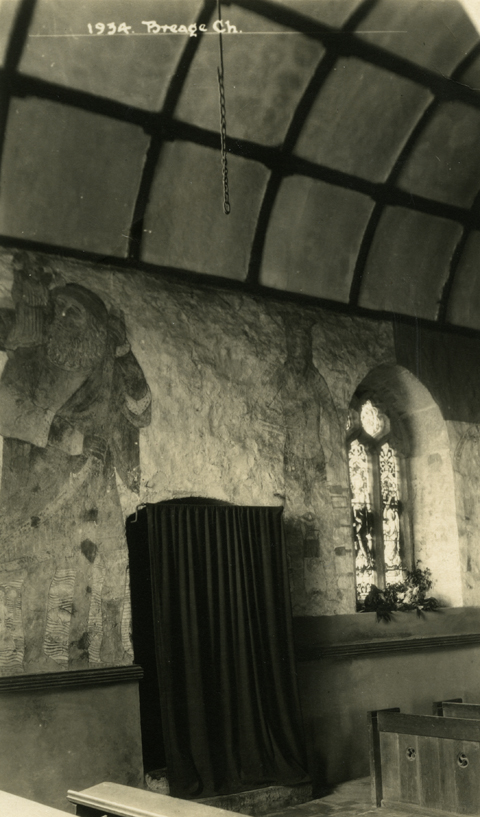 Interior of Breage Church, about 1950

Interior of Breage church showing two of the building's important late medieval wall paintings. Photograph by A H Hawke, about 1950. Harvesting at Treworlis Farm, Breage, about 1900

Treworlis Farm, Breage, at harvest time, about 1900. There are many people of all ages in the photograph, including many ladies with their children, some dressed smartly for the occasion. There are at least 10 men and several boys also posing for the photograph, on what appears to be a threshing machine. Behind the assembed group is a large hay rick. 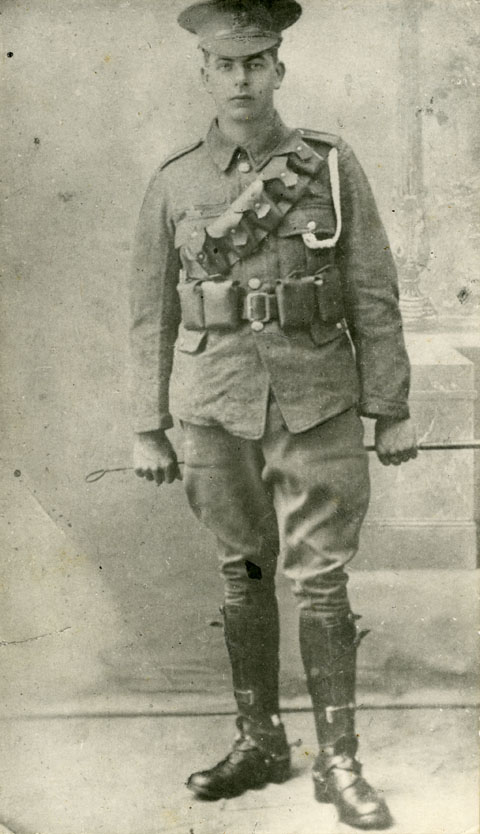 Private William James Martin of Breage, who gave his life on 27th March 1917, at the age of 20, while serving in France during World War One. William's service number was 45631 and he served with the Royal 1st Devon Yeomanry before serving with the 8th Battalion Devonshire Regiment. He was born in Breage to James and Jessie Martin, resided in Falmouth before the War and enlisted in Helston. He is commemorated on Bay 4 of the Arras Memorial, Pas-de-Calais, France.