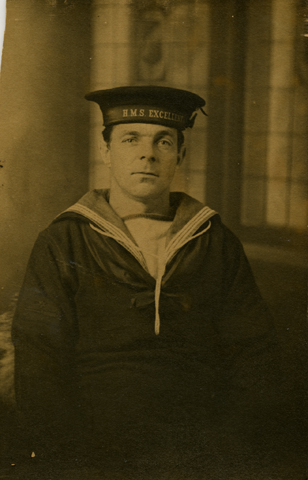 Hubert James Harry in Naval uniform while serving on the gunboat HMS Excellent between April 1915 and August 1916. Hubert was born on 18th June 1881 in Churchtown, Mullion to Anne Harry (formerly Casley) and James Harry. After serving on HMS Excellent he served on a number of Q Ships. Q ships were ordinary merchant ships or trawlers fitted with hidden guns during World War One. They were designed to lure enemy submarines into a surface attack, at which point the Q Ship would open fire. Hubert was one of only 3 survivors who spent several days on a raft after their Q Ship, HMS Begonia, was lost by enemy action. He joined the Royal Navy in 1898 and was invalided out of the service in July 1921. In addition to his service with the Royal Navy he was a boatman, fisherman and a member of Mullion Cricket Team. He died in 1958 at the age of 77.