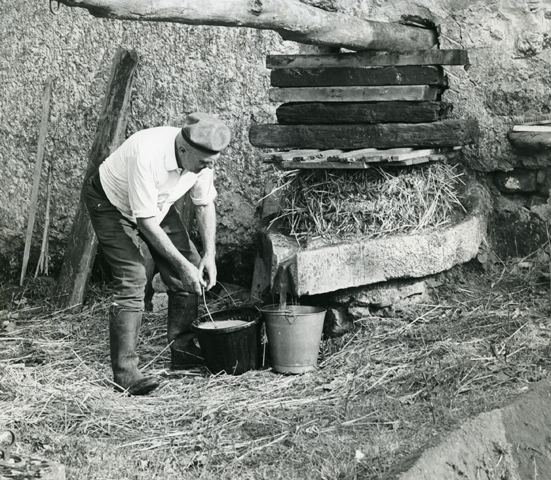 Clifford Lugg collecting cider from the press at Tregarne Farm, St Keverne, October 1978. The large stone weights on top of the cider press are being pressed down and Clifford is lifting a full bucket while cider can be seen flowing from the press into a second bucket on the ground. Clifford and his son, Barry, continued the family tradition of making cider on their farm. The apples are first placed in the crusher, which was over 100 years old at the time this series of photographs were taken. It was originally powered by horses before tractors were used. From the crusher the apples went to the granite press where barley straw is carefully packed in layers interspersed with the apples. Once packed, the top of the press was built up with giant stone weights to press the juice into a bucket. Cider had been made by the Lugg family for generations and, although it was only for family use, neighbours would often bring their apples to the Lugg's to crush and press. Press photograph published in the Helston Packet on 13th October 1978. One of a sequence of 6 photographs showing the cider making process at Tregarne Farm.