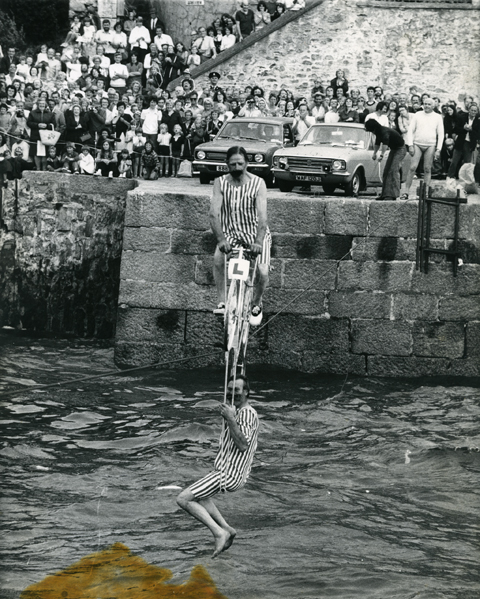 The high wire bicycle act on Porthleven Royal National Lifeboat Institution (RNLI) Lifeboat Day, about 1976. The act was performed from 1976 until 2002. In the early years, branch founder Stan Lloyd (riding the bike) and Herbie Uren (the bottom rider) rode across the harbour on a bike made from an old post office bicycle and using an ex-RNAS Culdrose winch cable. With the bike balanced on the cable, the bottom rider got on first. Using shouted instructions from the top rider, either "left lean" or "right lean", they made their way across (and sometimes back!) In later years, it was more of a free for all and most attempts ended up in the harbour. The bike ride was eventually stopped due to health and safety issues and insurance problems. The bike itself is now on display in Helston Museum. The photograph is part of the Jack Stephens Collection of local photographs.