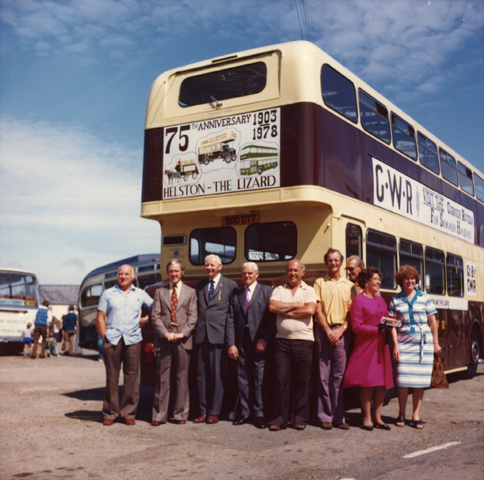 The Great Western Railway 75th anniversary GWR Bus at Helston Railway Station in 1978. A group of men and women are standing in front of the bus. They are names as Michael Tiddy(Proprietor of The Lizard Post Office), Arthur Johns (a serpentine turner), Douglas Hart (owner of Wavecrest Cafe), Wilfred Harris (a farmer), Peter Morris (from Goonhill)y, Mr Dean (from Goonhilly), Syd Yorston (former school teacher and museum owner), Joan Farnsworth (Parish Councillor) and Mrs Dean. In 1903, the Helston to Lizard service was the first in Britain to have regular buses timed to meet trains. It proved so successful that it was extended to other part of Cornwall and Devon.