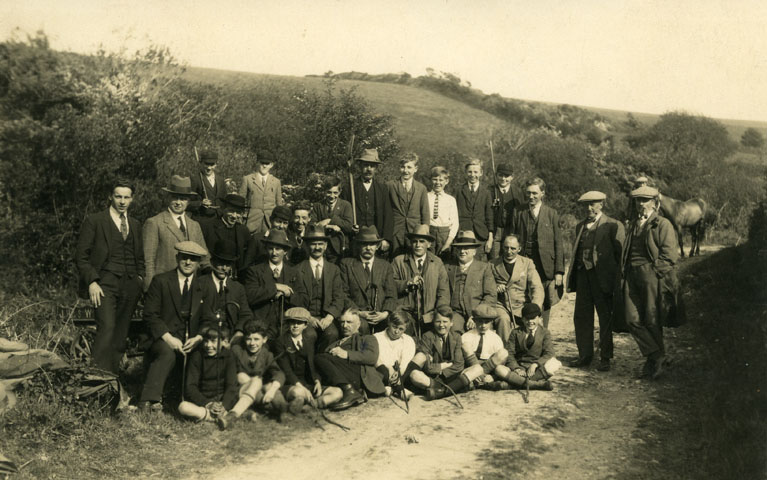 Photographic postcard of a large group of men and boys taken after tea at Blackdowns, Helston, during the Beating the Bounds ceremony on 22nd May 1928. Standing (left to right) a representative from the press, Mr Wesley Moyle, unidentified boy, Rev Gilbert Hunter Doble, S Oates, L Wearne, two unidentified boys, Mr Edwin Richards, Jack Shannon, 3 unidentified boys, Mr J P Rogers, Mr Edwin James, Mr W J Crute. Sitting (left to right) Mr W Maclean, unidentified visitor, Mr J Adams, Mr W J Rogers, Mayor John Bennett Martin, Mr Francis Henry Cunnack, Mr F P Sandry, Rev F G Graham. Sitting on ground (left to right) Mr W J Trezise in centre with 7 unidentified boys. The boys in the group include Cyril Reed, Tom Downing, H Symons, W Rogers and Jack Shannon from the Wesleyan School; Leonard Kinden, Francis Davies, A Hendy, Clifford Jeffery and Walter Bray from the Church School; Gerald Hawke, L Wearne, E Hender, S Oates, C Oliver and R Hart from the County Secondary School. Beating the Bounds is an ancient custom dating back to 1585 which continues to the present day. The perimeter of the Borough of Helston was marked by boundary stones, three of which remain in place today. In the days before maps, it was important to regularly walk the exact boundary to guard against encroachments and pass on this knowledge to the younger generation. A sod of turf was cut and placed on the boundary stone. Many of the children in the photograph can be seen holding sticks which were used to beat the turf. A sprig of May was then stuck into the turf and cheers were given before some of the children were turned upside down to have their heads bumped on the turfed stone. The tea was catered by Messrs J H & S Wearne whose signage can be seen on the left. Photograph by A H Hawke of Helston.