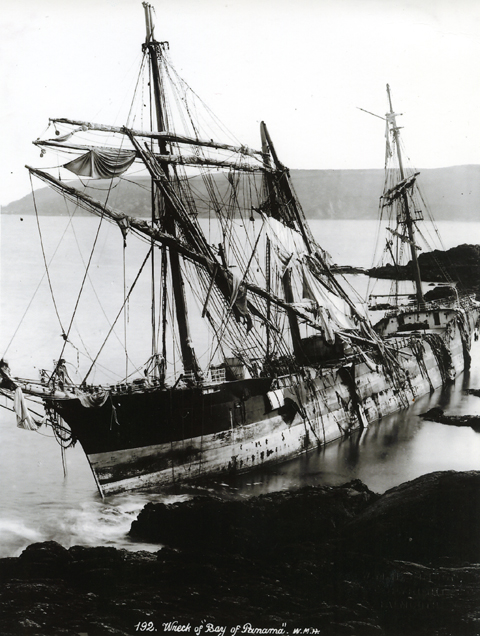 The wreck of the Bay of Panama, near St Keverne, in March 1891, by W M Harrison. The Bay of Panama was built by Hartland and Wolff in 1833 and was described as probably the finest sailing ship afloat. Because of her speed she was used on the Calcutta run, and on 18th November 1890 she left that port bound for Dundee loaded with a cargo of 13000 bales of jute. In March 1891 she met up with the worst blizzard Cornwall had suffered for over two hundred years. On 8th March distress flares were fired but because of the driving snow nobody saw them, and in the early hours of the following morning, the Bay of Panama was driven headlong into the cliffs just to the south of Nare Point. The Captain, his wife and six other crewmen drowned. Hardly able to see in the driving snow, and soaked by freezing water breaking over the deck, the Mate took charge and ordered everybody to the remaining rigging. Unfortunately the freezing spray turned quickly into ice, and many of them were frozen to death or died of exhaustion and cold. The Ships Bosun went completely mad, and flung himself off the rigging to drown. Only 17 of the 40 onboard survived. After being rescued, the men were fed and put to bed for the night in the village of St Keverne. The next day, wrapped in blankets they set off for Falmouth in a horse drawn bus but huge snowdrifts blocked the roads and the men were forced to carry on to Falmouth on foot. Joseph H James of St Keverne set out on foot for Falmouth to find out what was to be done with the ship and her cargo because telegraph wires and poles lay broken by the way side. He reached Falmouth utterly exhausted, but capable of delivering his messages, and a purse of gold was publicly presented to him for his bravery. Source: www.submerged.co.uk