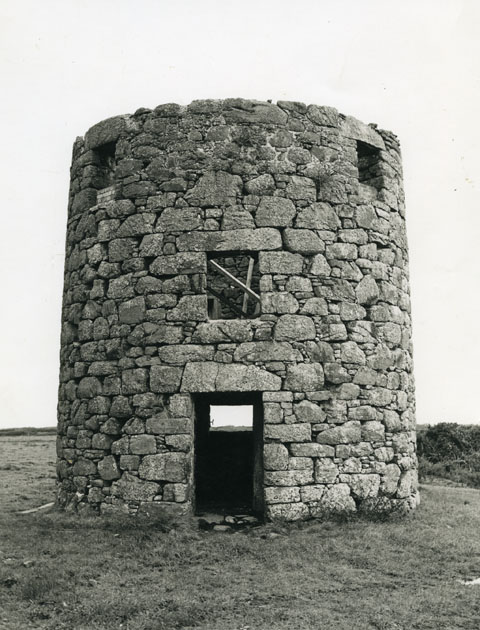 The ruined windmill tower at Windmill Farm on Predannack Downs, prior to its restoration. The structure is thought to have been built around 1600 and is one of only five surviving windmill towers in Cornwall. The circular stone tower is 30 feet high with walls 3 feet thick and made of serpentine and elvan. It forms part of the ancient manor of Trethervas and stands two miles north of The Lizard on Predannack Downs. Abandoned by 1696, it was later used by a gang of robbers, who terrorised The Lizard peninsula, as a base for their activities during the 1820s and 1830s. It was used as a Home Guard observation post in World War II and formed part of the defences for Predannack Airfield. The windmill is a scheduled monument and suffered damage during storms in 1969. The photograph was taken in 1970 before a pointed roof was added in 1971 to provide protection from the weather. See also HESFM:1977.945.