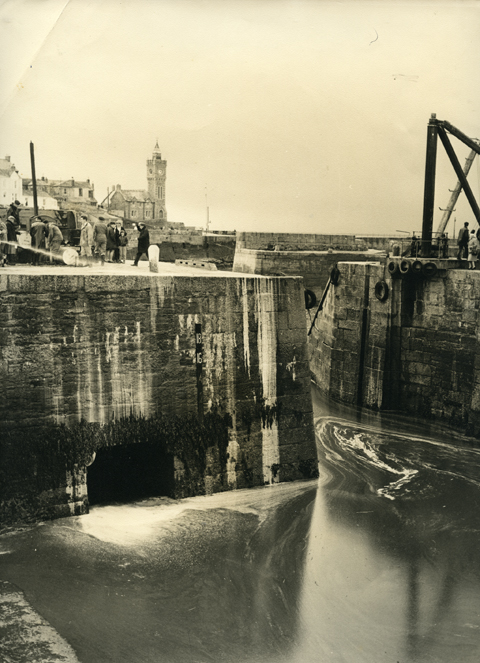 The oil slick at Porthleven Harbour after the wreck of the SS Torrey Canyon in March 1967. The photograph is of the entrance to the harbour. There are a number of people standing on the harbour walls observing. There is a good view of the sluice gate next to the entrance. The crane is on the right hand side of the harbour wall, this was used for raising the lowering the baulk. The crane has since been replaced. The outer harbour wall and the clock tower can be seen in the background. The tanker struck Pollard's Rock on Seven Stones reef, between the Cornish mainland and the Isles of Scilly, on 18th March 1967. Over the following 12 days, her cargo of over 119,000 tonnes of crude oil escaped into the Atlantic, resulting in Britain's largest oil spill to the present day. The slick contaminated 120 miles of Cornish coastline, then spread along the south coast of Britain and across to France. An estimated 15,000 birds were killed in addition to seals and other marine life. See also HESFM:1994.6401.1 and HESFM:1994.6401.3.