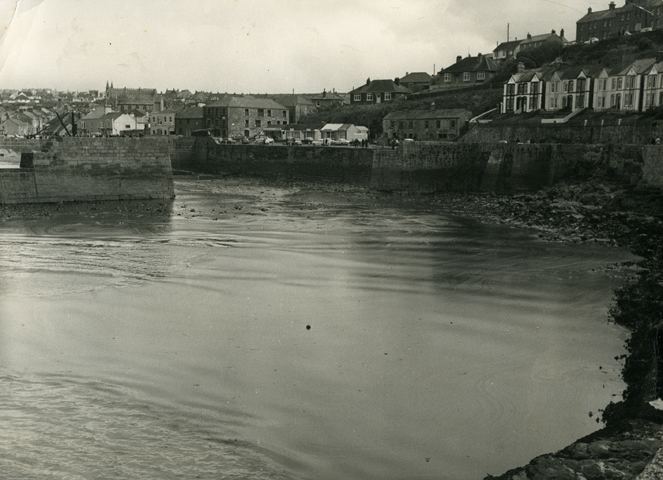 The oil slick at Porthleven Harbour after the wreck of the SS Torrey Canyon in March, 1967. It gives a view of the crude oil in the outer harbour at low tide. The crane used for lifting and lowering the baulk can be seen on the quay, the crane was much later removed and replaced. To the right of Salt Cellar Hill there is a row of shops, including Mr Edward's paper shop and also a row of old cottages. These have both been demolished and redeveloped into shops with flats over and holiday premises. The tanker struck Pollard's Rock on Seven Stones reef, between the Cornish mainland and the Isles of Scilly, on 18th March 1967. Over the following 12 days, her cargo of over 119,000 tonnes of crude oil escaped into the Atlantic, resulting in Britain's largest oil spill to the present day. The slick contaminated 120 miles of Cornish coastline, then spread along the south coast of Britain and across to France. An estimated 15,000 birds were killed in addition to seals and other marine life. See also HESFM:1994.6401.2 and HESFM:1994.6401.3.