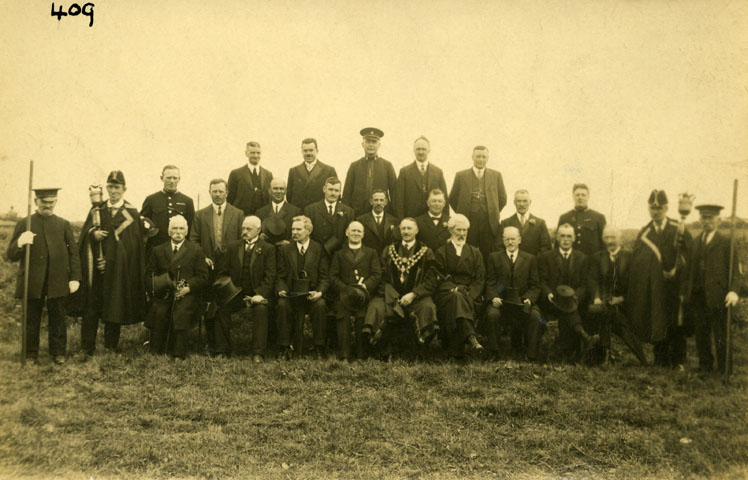 Laying the Foundation Stone of Helston and District War Memorial/Cottage Hospital, about 1922

Photographic postcard of members of the Helston Cottage Hospital Committee with the Mayor of Helston, William James Johns, and Town Councillors including the Town Clerk, Walker Tyack, at the laying of the foundation stone at the site of Helston and District War Memorial, about 1922. The hospital at Green Downs, Helston, commonly known as the Cottage Hospital, opened on 21st May 1923 and was built as a war memorial to the upwards of 200 men from Helston and district who gave their lives in the First World War between 1914 and 1918. The project of building a cottage hospital for a war memorial was first conceived in July 1919. Supporters from Land’s End to Helston raised £9,130 in money, services rendered and gifts in kind to build and equip the hospital. Building of the hospital began about 1922. Mr E H Winn of Helston was the builder and prepared the plans for the hospital. Mr R J Wearne, district sanitary inspector, carried out the duties of clerk of works. Mr S Freeman and Mr T H Wear acted as overseers under Mr Wearne. They all worked without payment or gave their fees to the hospital fund. Albert Jewel of Nancegollan, together with his workmen, and Italian Prisoners of War are also believed to have worked on construction of the hospital. The first patient was said to be Miss Belle Thomas who had her tonsils removed.