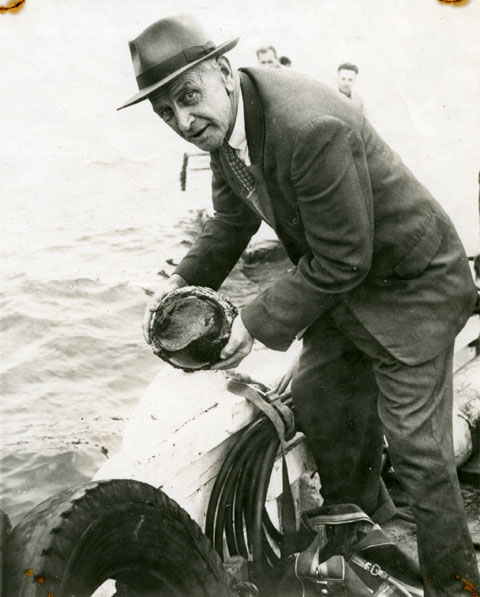 Frank Strike holding a cannon ball recovered from the wreck of HMS Anson. The photograph was taken on board the boat 'Guide Me' above the wreck site at Loe Bar in 1961. The cannon ball has a hole in it due to being rubbed against the cannon which was resting on it for over 150 years. HMS Anson was wrecked on Loe Bar on 29th December 1807. Although the vessel was not far from the shore, around 100 men drowned as they tried to swim to safety. It was this tragedy and the loss of life so close to the shore that inspired Henry Trengrouse in his groundbreaking ship to shore life saving inventions and set the scene for modern coastal safety. Salvage operations on HMS Anson were carried out in 1902, 1958, 1961 and 1964. Francis Edyvean (Frank) Strike was an undertaker in Porthleven and Mayor of Helston from 1957 to 1959.