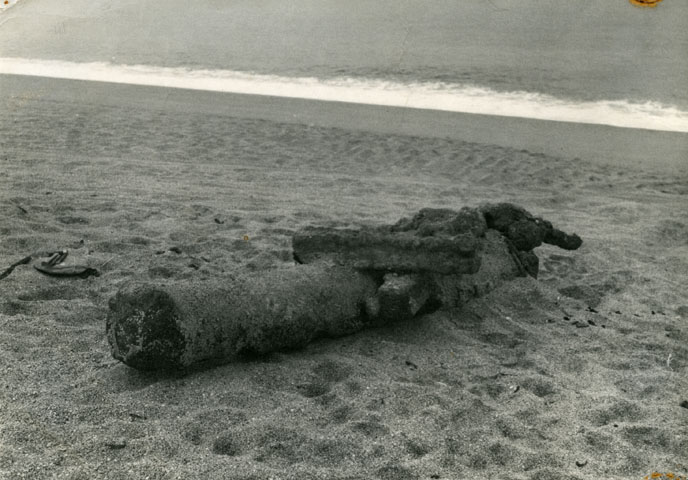 A cannon recovered from HMS Anson at Loe Bar in 1961. The attached iron ballast "pigs" and at least one cannon ball are visible. This particular cannon, when cleaned, was found to have lain upside down over the years which served to preserve the Royal crest of George IV, the broad arrow and a serial number. It is thought to be the only gun recovered with these markings intact. The gun's trunnions and wooden tampion were also intact. (See also 1977.2226). When this was removed, followed by a further tampion of oiled spun yarn, the bore was found to be dry, clear of rust and fully loaded with a paper wad and a charge of grapeshot. The frigate HMS Anson was wrecked on Loe Bar on 29th December 1807. Although the vessel, captained by Captain Lydiard, was not far from the shore, around 100 men drowned as they tried to swim to safety. It was this tragedy and the loss of life so close to the shore that inspired Henry Trengrouse in his groundbreaking ship to shore life saving inventions and set the scene for modern coastal safety. Salvage operations on HMS Anson were carried out in 1902, 1958, 1961 and 1964.