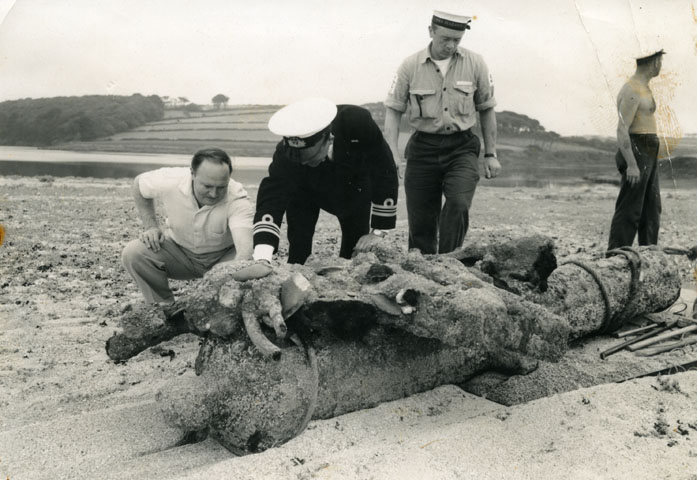 Recovery of a Cannon from HMS Anson, Loe Bar, 1964

The recovery of a 32 pounder cannon or gun from the wreck of the 'Anson' on Friday, July 17th, 1964. Salvaged by divers from the Naval Air Command Sub-aqua Club, the actual gun is almost unrecognisable under its coating of sand and gravel. Weighing 3.5 tons, the gun was found to be lying on a number of interesting items which had become cemented to the barrel. These items included three iron ballast 'pigs', four cannon balls, lead piping and unidentified iron items, bolts, rings, etc. The frigate HMS Anson was wrecked on Loe Bar on 29th December 1807. Although the vessel was not far from the shore, around 100 men drowned as they tried to swim to safety. It was this tragedy and the loss of life so close to the shore that inspired Henry Trengrouse in his groundbreaking ship to shore life saving inventions and set the scene for modern coastal safety. Salvage operations on HMS Anson were carried out in 1902, 1958, 1961 and 1964.